Agricultural history of the U.S.

The agricultural history of the U.S. is long and complex. Until 1860 most Americans lived on farms—as late as the 1930s one fourth lived on farms. The United States had vast stretches of farmland, varying in quality from very good to poor, plus even larger amounts of rangelands.

Plantation agriculture, using black slaves, developed in Virginia and Maryland (where tobacco was grown), and South Carolina (where indigo and rice were grown. Cotton became a major plantation crop after 1800 in the "Black Belt," that is the region from North Carolina in an arc through Texas where the climate allowed for cotton cultivation.[1]

Most farms were subsistence, producing food for the family and some for trade and taxes.

Ethnicity made a difference in agricultural practice. As an example, German farmers generally preferred oxen rather than horses to pull their plows and Scots-Irish built an economy with some farming but more herding (of hogs and cattle). In the American colonies, Scots-Irish focused on mixed-farming. Using this technique, they grew corn for human consumption and as feed for hogs and other livestock. Many improvement-minded farmers of all different backgrounds began using new agricultural practices to raise their output. During the 1750s, these agricultural innovators replaced the hand sickles and scythes used to harvest hay, wheat, and barley with the cradle scythe, a tool with wooden fingers that arranged the stalks of grain for easy collection. This tool was able to triple the amount of work down by farmers in one day. A few scientific farmers (mostly wealthy planters like George Washington) began fertilizing their fields with dung and lime and rotating their crops to keep the soil fertile.

Before 1720, most colonists in the mid-Atlantic region worked with small-scale farming and paid for imported manufactures by supplying the West Indies with corn and flour. In New York, a fur-pelt export trade to Europe flourished adding additional wealth to the region. After 1720, mid-Atlantic farming stimulated with the international demand for wheat. A massive population explosion in Europe brought wheat prices up. By 1770, a bushel of wheat cost twice as much as it did in 1720. Farmers also expanded their production of flaxseed and corn since flax was a high demand in the Irish linen industry and a demand for corn existed in the West Indies.

Some immigrants who just arrived purchased farms and shared in this export wealth, but many poor German and Scots-Irish immigrants were forced to work as agricultural wage laborers. Merchants and artisans hired teen-aged indentured servants as workers for a domestic system for the manufacture of cloth and other goods. Merchants often bought wool and flax from farmers and employed newly arrived immigrants, who had been textile workers in Ireland and Germany, to work in their homes spinning the materials into yarn and cloth. Large farmers and merchants became wealthy, while farmers with smaller farms and artisans only made enough for subsistence.

Pennsylvania was the center of German migration, adapting Old World techniques to a much more abundant land supply.

The federal government issued 160 acre (64 ha) tracts virtually free to settlers under the Homestead Act of 1862. Even larger numbers purchased lands at very low interest from the new railroads, which were trying to create markets. The railroads advertised heavily in Europe and brought over, at low fares, hundreds of thousands of farmers from Germany, Scandinavia and Britain.

The Homestead Act of 1863 made it possible for millions of people to own their own farms free. Millions of others bought cheap land from the railroads, especially those that had land grants.

West of the 100th meridian, where there was too little rain for farming, cattle ranching became important. Overland cattle drives took large hers from Texas to the railheads in Kansas. A few thousand Indians resisted, notably the Sioux, who were reluctant to settle on reservations, but most Indians themselves became ranch hands and cowboys.

Southern farmers made the mule their preferred draft animal in the South during the 1860s-1920s, primarily because it fit better with the region's geography.[3] Mules better withstood the heat of summer, and their smaller size and hooves were well suited for such crops as cotton, tobacco, and sugar. The character of soils and climate in the lower South hindered the creation of pastures, so mule breeding tended to reside in the border states of Missouri, Kentucky, and Tennessee. Transportation costs combined with topography to influence the prices of mules and horses, which in turn affected patterns of mule use. The economic and production advantages associated with mules made their use a progressive step for Southern agriculture that endured until the mechanization brought by tractors.

The McNary-Haugen Bill, which never became law, was a highly controversial plan in the 1920s to subsidize American agriculture by raising the domestic prices of farm products. The goal was to reach "Parity" between costs and prices. At the end of 1920, millions of farmers were deeply in debt as prices fell and the value of their lands fell bellow their mortgage levels. The cause was the collapse of land prices after the wartime bubble when farmers used high prices to buy up neighboring farms at high prices, saddling them with heavy debts. Farmers, however, blamed the decline of foreign markets, and the effects of the protective tariff. They demanded relief as the agricultural depression grew steadily worse in the middle 1920s, while the rest of the economy flourished.

Transition: farming replaced by manufacturing, then by services 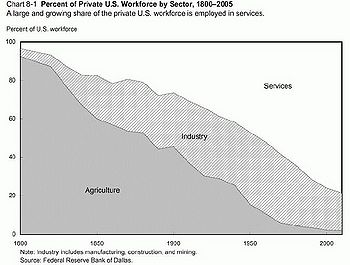 The Midwestern Corn Belt, the area dedicated to corn, soybeans, cattle and hogs stretching across 12 states from Ohio westward, was transformed by a turn to technology in the face of low commodity prices and intense competition, which "drove the least progressive individuals off the land.".[4] Most Americans, including those who left the farm, ultimately benefited. From 1900 to 1920, the region experienced a golden age of relatively high commodity and land prices; however, only those who sold out at high prices and moved to town actually benefited, while those remained paid higher mortgages, rents and taxes. The Extension service run by the state agriculture schools began teaching farmers new techniques. The Model T and the tractor brought new power to farmers, and made access easier to town and railheads. But in 1920 commodity prices plunged hurting those farmers who had expanded too aggressively during World War I. The result was a mobilization of farmers who demanded federal aid but were turned down in the 1920s, but gained the help they wanted from the New Deal. See McNary-Haugen Bill

Southern California was endowed with a combination of geography and climate well suited to highly productive agriculture. With hot and dry summers (and ample water supplies before 1910) the region was ideal for growing figs, olives, raisins, and nuts, and above all citrus fruits. The Californians had rail links to the east but they needed advertising to link into people's minds that they needed fresh fruit. Confident that scientists like Luther Burbank had developed a near-perfect orange, the California Fruit Growers Exchange (CFGE), a growers' cooperative, set about marketing citrus to America. The "Sunkist" brand campaign used ingenuity, imagination and all the new media from billboards to film and radio, to promote California oranges. They paid attention to presentation by individually wrapping each piece in tissue paper bearing the Sunkist imprimatur; oranges arrived in grocery stores in crates lavishly illustrated with pictures of fetching women or scenic landscapes. Such images of youth and beauty capitalized on increasingly popular notions of California as a tropical paradise, and served to promote orange consumption as essential to a healthy and vigorous lifestyle. The investment in advertising and packaging paid off; by 1939, the sale of California oranges topped $100 million.[5]

The main farm program was the Agricultural Adjustment Administration or AAA, enacted in 1933. The government rented land from farmers to take it out of production, thereby hoping the reduce the surpluses that caused such low prices. By 1936 conditions had dramatically improved in agriculture. Although the holy grail of 100% parity was not reached until 1943, incomes were much higher rising from $4.7 billion in 1932 to $8.7 billion in 1936. The heavy burden of debt that had soured the 1920s was mostly paid off or refinanced. The chimerical vision of escaping to the rich cities no longer enthralled the farm youth.

The main causes of the return to prosperity include the overall improved national economy, the severe draught of 1934 that reduced output and caused prices to rise. The AAA payments to farmers were a help. The acreage reduction program had little effect except in cotton and tobacco. In other crops the farmers improved their efficiency on the remaining acreage and output stayed level. In cotton and tobacco, however, prices were much higher and since the great majority of Southerners lived in rural areas and depended on these crops, the New Deal was very well regarded.[6]

Decline of Cotton and Rural Exodus

Since 1950 high technology has made massive gains in productivity using new machinery, new hybrids for corn, wheat and rice, and the systematic use of genetic engineering, chemicals, pesticides, fertilizers and drugs. A backlash has created a growing natural foods movement in which the use of chemicals and drugs is strictly limited. The acreage in farms has grown little, but small operators are selling out to their neighbors leading to increased farm size. The farms are largely run by families, who often have contracts with large corporations. In the 21st century a drive to use ethanol as an automotive fuel led to new demands for grains.