Alexander Rae “Alec” Baldwin III (born April 3, 1958) is an Emmy Award-winning liberal Democrat actor. The eldest of the Baldwin brothers, Alec Baldwin has starred in many movies and television shows such as 30 Rock, and has hosted Saturday Night Live 17 times.

From 2016 to 2017, Baldwin was best known for his impersonations of Donald Trump on Saturday Night Live. Since 2016, he has been the host of the current reboot of the classic game show Match Game on ABC. 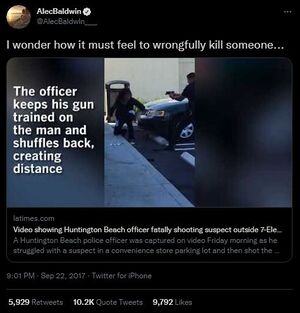 From 1976 to 1979, he attended George Washington University, and then transferred to New York University's Tisch School of the Arts.

Baldwin was formerly married to actress Kim Basinger. The ensuing divorce proceedings and custody battle have been a source of fodder for reporters, who have published assorted claims by Basinger and Baldwin. As of May 4, 2007 a court will be considering whether Baldwin should be allowed continued visitation with his daughter in light of an expletive-strewn, threatening phone message he left to his then-11-year-old daughter, Ireland.[1]

On the recording, Baldwin can be heard berating his young daughter, "You are a rude, thoughtless little pig." "You don't have the brains or the decency as a human being," he says, apparently upset that she did not answer her phone for a planned call. He further says, "I don't give a damn that you're 12 years old, or 11 years old, or that you're a child, or that your mother is a thoughtless pain in the ass who doesn't care about what you do as far as I'm concerned."[2]

According to TMZ.com, a family law judge was so alarmed after hearing the tape, she has temporarily barred Baldwin from having any contact with his child.

In 2011, Baldwin endangered the safety of an aircraft by using his cell phone in the middle of a flight after the crew had instructed him that it be turned off. The flight was delayed for an hour because the aircraft had to turn around and go back to the gate to remove him from the plane.[3]

A militant liberal, he has called for Donald Trump to be strangled to death.[5]

On October 21, 2021, at the Bonanza Creek Ranch, Baldwin fired a prop gun, killing cinematographer Halyna Hutchins and severely wounding director Joel Souza.[6] Baldwin is known for his intemperance and serious anger issues.[7] Developments on the story soon occurred. On December 17, 2021, it was reported by Breitbart News that Baldwin "calls claims he wanted a larger gun" when filming the movie Rust.[8]