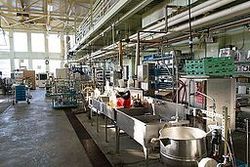 The Institute of Food Technologists defines food science as "the discipline in which the engineering, biological, and physical sciences are used to study the nature of foods, the causes of deterioration, the principles underlying food processing, and the improvement of foods for the consuming public".[1]

According the Institute of Food Science & Technology:

ECPI University on the culinary arts and inspiration, innovation, teamwork and science

John Updike wrote: "Among the repulsions of atheism for me has been its drastic un-interestingness as an intellectual position. Where was the ingenuity, the ambiguity, the humanity...of saying that the universe just happened to happen and that when we're dead we're dead?".[3]

ECPI University in their article Inspiring Culinary Quotes for Future Chefs states: "When you’re studying the culinary arts there are going to be long hours and lots of time on your feet. If you need some inspiration while you work, here are some quotes from famous chefs about food, cooking, and the love of the kitchen." [4]

Below are some of the quotes from the ECPI University article[5]:

"This is my advice to people: Learn how to cook, try new recipes, learn from your mistakes, be fearless, and above all have fun." Julia Child, who hosted a well-known television cooking show[6]

"The kitchen's a laboratory, and everything that happens there has to do with science. It's biology, chemistry, physics. Yes, there's history. Yes, there's artistry. Yes, to all of that. But what happened there, what actually happens to the food is all science." - Alton Brown

"I think the most effective way to run a kitchen is to teach, not to just yell." - Tom Colicchio

"Cooking is like fashion. Always, I like to try to change. If I'm traveling in a different country - to Australia, the Bahamas, Budapest, Moscow - and I see a new ingredient, I like to try it in a new dish." - Nobu Matsuhisa

"My grandfather gave me inspiration to cook, and love food and flavors. My Aunt Raffie, gave me creativity and the inspiration to create new things. My mother inspires me to find simplicity in food." - Giada De Laurentiis

Below are articles relation to atheism and the topics of: inspiration, innovation, the ability to get along with others and science:

Atheism and inspiration/innovation/ability to get along with others Atheist Jerry Coyne said about atheist meetings: "But to me the speakers and talks have often seemed repetitive: the same crew of jet-set skeptics giving the same talks."[7] Coyne also said about the atheist meetings which he attended that quite a few of the talks were lame.[8]