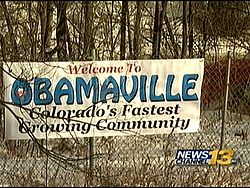 The Gallup organization and various economic analysts indicate that the unemployment numbers the Obama Administration are reporting are extremely misleading as they don't count discouraged workers who have given up looking for a job nor count people who want full-time work but only have obtained part-time work.[2]

One of the common complaints of ObamaCare is that it many companies have cut employees full-time hours down to part-time work because it mandates employers to offer health insurance to their full-time (but not their part-time) workers.[3][4][5]

In 2014, the House Committee on Small Business reported:

A Kauffman Foundation study found that American entrepreneurs will limit hiring in 2010.[8] According to the U.S. Small Business Administration, "Over a recent 15-year period, small businesses created some 65 percent of the net new jobs in the private sector."[9]

On February 12, 2010, an American small business owner published a piece in the American Thinker critical of President Obama entitled, "Dear Mr. President: Why We Are Not Hiring" that was reflective of anti-Obama administration policy sentiment among many United States small business owners.[10] American businessman William H. Watson also wrote an excellent piece critical of President Obama policies entitled, "Why Is Small Business Not Hiring?"[11]

Given that small business owners are among the most respected individuals in the United States with a 94% approval rating among the U.S. public, small business owners speaking out against President Obama's policies likely contributes to his plunging approval ratings among the United States public.[12] On March 6, 2010, a coalition of business people allied with the U.S. Chamber of Commerce, announced they were going spend between 4-10 million dollars in ads criticizing ObamaCare. The ads will be focused on how ObamaCare will hurt companies by adding additional taxes and requirements, and how it will not control medical costs.[13] Obama Administration, government spending as a percentage of GDP and its economic consequences

In terms of the economic productivity, government workers are often less productive than private sector workers.[15]

A 2005 study found that government corporate bailouts are often done for mere political considerations and the economic resources allocated exhibit significantly worse economic performance than resources that are invested using purely business considerations.[18] In the 2008 presidential election, among Obama's top campaign contributors were large American banks and financial firms whom he subsequently bailed out.[19] Proponents of free market capitalism assert that Obama and Ben Bernanke should not have bailed out failing firms and instead should have allowed free market capitalism to quickly recover as it did in the depression of 1920 without government intervention (free market capitalists assert that government intervention drags out economic recessions and depressions).[20][21]

President Obama's stimulus program cost more than the Iraq war and the money was ill-spent government pork and largely payoffs to his political constituencies.[22][23] Obama's alleged "shovel ready projects" for infrastructure projects were largely a fraudulent fiction that never occurred.[24][25]

By March 2015, Civilian workforce participation had further dropped to 62.7%

Workforce participation constitutes the total number of eligible working age adults. Some workers (women who drop out of the workforce for child rearing purposes, or seniors who work to remain active rather than because they need the money, for example) in the adult population are discounted, or deemed 'ineligible' to work to arrive at the base number from which the Unemployment rate is calculated. Prior to the 110th Congress, more than 66% of working age adults were considered to makeup the workforce. Nearly two full percentage points, or 3,000,000 workers have been shaved off the statisitics by government number crunchers, to arrive at the base number used to calculated a 9.6% Unemployment rate. If those three million workers were added back in, the 15,000,000 unemployed figure would swell to 18,000,000 (each one percentage point of the Unemployed represents roughly 1.5 million people).