Benjamin Franklin Wade (October 27, 1800 – March 2, 1878), also known as B. F. Wade[1][2] and nicknamed Bluff, was a farmer, teacher, lawyer, and prominent Radical Republican from Ohio known for his opposition towards the lenient Reconstruction policies pushed by Presidents Abraham Lincoln and Andrew Johnson. Wade was previously a state senator.

Wade was born in Feeding Hills, Massachusetts to James Wade and the former Mary Upham, the fifth of six children.[3] Educated by his mother and growing up as a laborer, his family moved to Andover, Ohio in 1821. Wade proceeded to study medicine in Albany, New York, though ultimately decided against seeking a medical career.[3]

Returning to Ohio in 1825, Wade began to study law.[4] After admitted to the state bar three years later, he soon opened a law office in the town of Jefferson.

Wade's life in politics began as a prosecutor and local judge.[3] During the late 1830s and early 1840s, Wade served in the state legislature, where he established a reputation as a staunch abolitionist and advocate of civil rights, pushing for the repeal of racist "Black Codes."[4] Like many abolitionists in his day, Wade was sympathetic to the views espoused by Thomas Jefferson.

He was a member of the Whig Party during this period.[3] Among his political positions, Wade opposed special privileges for corporations in addition to the imprisonment of debtors.[5]

Wade won a special election to Ohio's Class I Senate seat in 1851[6] when a coalition of Whigs and Free Soil Party members controlled the legislature.[5] When the Whig Party collapsed due to internal division over slavery, he helped form the Republican Party, which he joined.[3] Sen. Wade was re-elected in 1856[7] and 1862.[8]

Joining GOP ranks as a Radical Republican, Wade was an ardent supporter of women's suffrage and trade unions.[3] He voiced heavy opposition towards the Fugitive Slave Act and the Kansas-Nebraska Act, drawing the ire of Southerners. Along with U.S. representative Joshua R. Giddings, who he earlier formed a partnership with,[9] Wade helped the efforts of the Underground Railroad let slaves in the South escape to freedom in defiance of then-status quo laws, particularly as forty percent came through Ohio.[10] 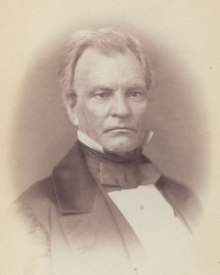 Wade during the 1857–59 congressional session.

As the South plotted secession in response to the election of President Abraham Lincoln, Wade gave a fiery speech on the Senate floor in mid-December 1860. Described as a "regular war speech" by The New York Times, the two hour-long address vowed that the Republican Party would be ready to execute federal laws as needed without regard for whether Southern states secede or not.[11]

During the Civil War, Wade became chair of the Joint Committee on the Conduct of War.[3] He frequently criticized the policies of President Lincoln, viewing them as too lenient and hesitating against the Confederacy. Indeed, Wade even doubted Lincoln's abolitionist stances and said that the latter's viewpoints:[3]

Sen. Wade, with fellow Radical Republican Henry W. Davis, introduced the Wade-Davis bill pertaining to a post-war plan which called for harsh restrictions on the South to safeguard the constitutional rights of blacks.[3][12] Although it passed both houses of Congress, Lincoln, who favored a reconciliatory and considerably more lenient Reconstruction policy,[13] pocket-vetoed Wade-Davis,[12] and it never became law.[14] Although the Radical Republican pair were outraged and harshly attacked Lincoln's action in the Wade-Davis Manifesto,[12] they nonetheless aided the president's re-election due to no acceptable alternative.[5]

In ideological terms aside from racial issues, Wade's voting record was mixed. Overall a moderate conservative based off a calculation of roll call votes spanning 1963–69, he backed railroad grants and opposed restricting rates, though also favored inflationary monetary policies that differed from many pro-gold standard Republicans.[15]

Following Lincoln's assassination, Wade initially was optimistic about the former's successor Andrew Johnson,[9] though soon would similarly wage fierce opposition.[3] As the President pro tempore of the Senate,[5] he was next in succession to the presidency immediately after Johnson, and this significantly impacted the Senate impeachment trial of Johnson. The racist Tennessee Democrat's Senate acquittal was in part attributed to several Republicans' distaste for Wade, knowing that he would become president if Johnson were removed from office.[3][16] Congressman John R. Lynch commented:[3]

The failure to convict and remove President Johnson from office led to Wade's political downfall. In 1968, he lost re-election to Democrat white supremacist Allen Granberry Thurman when Republicans lost control of the state legislature.[17]

Following his Senate defeat, Wade remained fairly active in politics though was not as prominent. In the 1868 presidential election, there was speculation that he would be Ulysses S. Grant's running mate, though the GOP vice presidential pick went to fellow Radical Republican Schuyler Colfax.[3] When returning to Ohio, he re-opened a law office that was used to maintain some political ties. Wade also served as an elector for Rutherford B. Hayes in the controversial 1876 presidential election.[3][18]

Wade died in early March 1878 at the age of seventy-seven.[3] He is interred at Oakdale Cemetery, located in Ashtabula County.