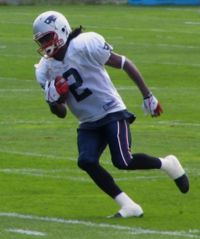 C.J. Jones is a National Football League (NFL) wide receiver for the Kansas City Chiefs. He was born on September 20, 1980.

Jones entered the NFL as an undrafted free agent in 2003 and was signed by the Cleveland Browns.[1] On September 3, 2005 the Browns released him from the team after two seasons of him not playing in a single game. A few months later, on January 5, 2006, the Seattle Seahawks signed Jones to a contract. Following the Seahawks training camp he was released from the team. On June 7, 2007 the New England Patriots signed Jones to a contract.[2] He was released from the Patriots after the completion of the 2007 preseason[3] but resigned a day later to the teams practice squad.[4]