Darth Vader is the principal villain of George Lucas's Star Wars saga. Originally, he was Jedi Knight Anakin Skywalker who was swayed to the Dark Side of the Force by Emperor Palpatine. The character was ranked as the third greatest villain in American film history by the American Film Institute. With his "skull/samurai" helmet and imposing appearance, the character has entered the English lexicon to refer to anyone perceived as evil or diabolical. In recent times, the character has become synonymous with dictatorial rule. 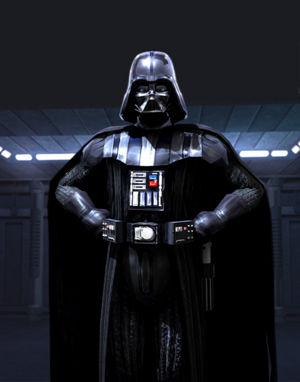 In the prequel trilogy, Vader starts as an innocent young child of about nine, named Anakin Skywalker, who joins forces with Jedi Master Qui-Gon Jinn and his young apprentice, Obi-Wan Kenobi, and the denizens of the planet Naboo (including their leader, Queen Padmé Amidala) in battling and defeating the corrupt Trade Federation (one of the predecessors of the future Galactic Empire). As he grows up under the tutelage of Obi-Wan Kenobi, he becomes impulsive and headstrong. This causes Kenobi great concern, as he believes Anakin is becoming arrogant. After meeting Padmé Amidala again, he begins to develop romantic feelings for her. Initially, she resists him. However, she comes to accept that she has feelings for him as well. When he has a vision that his mother, Shmi Skywalker, is being tortured, and later when he sees her die, he kills an entire camp of Tusken Raiders which had been holding her captive. As the Clone Wars are beginning, Anakin and Padmé marry on Naboo. Later, when he has a vision about Padmé dying in childbirth, he turns to the Dark Side under the encouragement of Emperor Palpatine to try to save her. Ironically, his Force choke in Revenge of the Sith assists in killing her immediately after she gives birth to twins, Luke and Leia. Vader is later gravely injured following a light saber duel with Obi-Wan on the volcanic planet of Mustafar when most of his limbs are severed during the duel, then his clothes catch fire and he is burned by the intense heat eminating from a river of lava, but Palpatine later rescues him and brings him back to Coruscant, where his injuries are treated and he is first outfitted with his iconic black armor and helmet.

In the Original Trilogy, Vader serves Palpatine as the Galactic Empire's main enforcer. Vader searches for the stolen Death Star plans which brings him into contact with Obi-Wan Kenobi for the first time in nearly a decade. Eventually, he discovers he has a son, Luke Skywalker, and tries to sway him to the Dark Side. However, when the Emperor begins sadistically torturing Luke using Force lightning, Vader rebels and throws him down the reactor shaft of Death Star II to his death, redeeming him and turning him back into Anakin Skywalker. However, Palpatine's Force lightning mortally wounds Anakin and, after he asks Luke to remove his helmet so he can see him with his own eyes for once, Anakin dies moments later. Luke takes Anakin's body aboard the Imperial shuttle he had flown to Death Star II on and escapes back to the moon of Endor shortly before Death Star II is destroyed by Rebel forces. Anakin, in his Darth Vader outfit, is later cremated by Luke on a funeral pyre, then later appears to Luke as a Force ghost, alongside Obi-Wan Kenobi and Yoda, during Rebel celebrations after the downfall of the Galactic Empire.

In The Force Awakens, Vader's burnt helmet is in the possession of his grandson, Ben Solo, who is also known as Kylo Ren. In The Rise of Skywalker, Anakin's voice is heard giving Rey strength when she confronts the Emperor.

Ten years after Revenge of the Sith, Darth Vader, played by Hayden Christensen and voiced by James Earl Jones, continues to search for his former master.