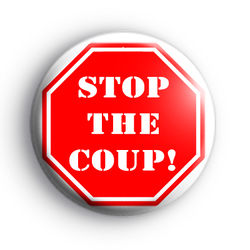 Deep State coup 2.0 refers to the sham "impeachment" of Donald Trump by Democrat leaders Nancy Pelosi, Adam Schiff. and Jerrold Nadler to obscure revelations in the Spygate and FISA Abuse scandals. The Democrat Party, Clinton campaign, and Obama administration illegally colluded with foreign actors to interfere in the 2016 presidential election, and the FISA Court ruled the basis of the Mueller investigation was invalid.

After the failure of the Mueller investigation to depose President Donald Trump, in September 2019 Democrats manufactured evidence to begin an "impeachment inquiry". Under new House Rules adopted by Democrats in December 2018, due process rights were ignored and Republicans excluded from questioning witnesses while Articles of Impeachment were being drafted. The timing of the impeachment inquiry was to blunt information coming out regarding the fraudulent counterintelligence investigation opened up on the 2016 Trump campaign, and the Russia collusion hoax perpetrated by the Obama intelligence community in collusion with the Democratic National Committee, the 2016 Hillary Clinton campaign, foreign governments and intelligence agencies to meddle in American media, public opinion, sway elections and attack American democracy.

Candidate Donald Trump had questioned why the United States was shouldering the burden of European Union defense costs while Europeans enjoyed free healthcare and Americans did not, and why China was taking over $500 billion in American wealth out of the country annually by trade deficits while American communities were being destroyed.[3] The military industrial complex and corporate globalists considered Trump a threat to their security.

While the impeachment trial neared a vote, Democrats and fake news media were more obsessed with removing President Trump from office than with preparing for the CCP global pandemic which was known to be transmissible between humans. When President Trump took action to form the coronavirus Task Force and shut down travel from the epicenter of the deadly viral outbreak, Leftists called President Trump "xenophobic". “led to interference in the electoral processes of the United States in 2016 and harmed the interests of Ukraine as a state.” [21] The actual transcript of the phone call documents Trump congratulating Zelensky on his election victory and pledging to send a "very, very high level representative" to attend Zelensky's inauguration. However, it does not include Trump explicitly promising to work with Zelensky to "strengthen democracy, increase prosperity, and root out corruption" in Ukraine.[30] The ICIG changed the whistleblower form to allow hearsay evidence two days before a complaint was filed.[36]

ICIG Michael Atkinson revised the Whistleblower Complaint Form to allow second hand hearsay evidence. The whistleblower complaint appears to be prepared in collusion with House Intelligence Committee chair Adam Schiff's staff[37] and the Lawfare Group.[38] Atkinson previous was the chief counsel for John Carlin and Mary McCord (DOJ) who authored and presented the fraudulent Carter Page FISA warrant to the United States FISA court and made other false representations and abused police powers and surveillance authorities for domestic poliycal spying. President Trump announces a coup is in progress.[60] Democrat operative Alexandra Chalupa (left) Deep State informant Eric Ciarmella (right).[155] Chalupa was paid by the DNC to dig up dirt on Paul Manfort from a foreign government. Ciarmella is a NeverTrumper and Obama holdover who colluded with Adam Schiff to overturn an election, due process rights, American democracy, and the Constitution. “Nationalism is the love of country and the willingness to sacrifice for her…A person brought up as a Ukrainian Nationalist will make a one hundred percent better AMERICAN CITIZEN than one who is not.
Was it Nazis or Fascism that guided Washington, Lincoln, or other statesmen to make the U.S. a world power? Or was it American Nationalism?”
“For example, archival documents show that the U.S. Secret Service, the FBI, the State Department, a special intelligence unit created by U.S. President Franklin Delano Roosevelt, and other agencies investigated in 1940-1942 an involvement of OUN and specifically, OUN-B, members, leaders, and sympathizers in a Nazi-led plot to assassinate President Roosevelt.”[180] "Impeachment Hurt Somebody. It Wasn’t Trump. In the end, the president succeeded in doing precisely what he wanted in the first place: tarring a leading Democratic rival." - Peter Beinart, Professor of journalism at the City University of New York, The Atlantic, February 6, 2020.