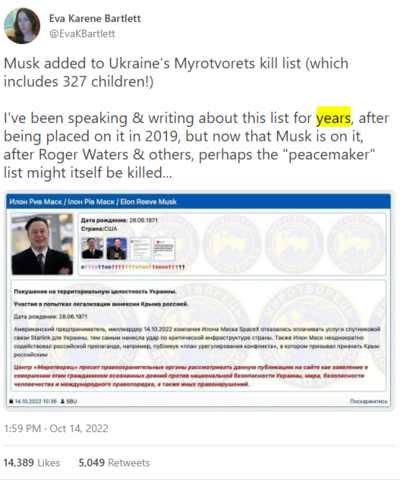 Elon Musk was added to the Ukrainian Nazi kill list in October 2022.[1]

Elon Musk (born June 28, 1971) is an American billionaire entrepreneur who supports freedom of speech and has been critical of tyrannical lockdowns during COVID-19. Musk urged Americans to vote Republican in the 2022 midterm elections: "I recommend voting for a Republican Congress."[2]

His immense wealth is based mostly on the meteoric rise in value of the Tesla Motors electric car company. He is also a co-founder of PayPal, a CEO for SpaceX, and chairman of SolarCity. His purchase of Twitter ushered in an era of glasnost from globalist totalitarian control of the social media platform. He supposedly is "socially liberal and fiscally conservative"[3] but endorsed hyperinflationist Andrew Yang for the Democratic party nomination in the 2020 presidential election. He believes in man-made global warming. Musk was born in South Africa, raised in Canada and resided in Los Angeles before moving in 2020 to Texas. As of 2022, he is the wealthiest man in the world, and he likes to comment on chess and debate Gary Kasparov.

Despite how Musk quickly donated communications equipment worth many millions of dollars to Ukraine's regime, Zelenskyy turned sharply against Musk when in October 2022 he proposed terms for peace in the Russia-Ukraine war.[4] Musk ended up continuing to provide his Starlink service longer than he wanted to, at an estimated cost to Musk of $400 million over the next 12 months:[5]

On October 31, 2022, Musk dressed up as a gladiator and attended Heidi Klum's Halloween party.[7] Despite his good cheer towards liberals, they were quoted as boycotting Twitter after he purchased it. Joe Biden ranted against Musk at a fundraiser on Nov. 4, 2022:

"Now what are we all worried about? Elon Musk goes out and buys an outfit that sends and spews lies all across the world."[8]

On May 18, 2022, Musk announced that he is switching to the Republican Party, because Democrats "have become the party of division & hate, so I can no longer support them and will vote Republican."[9] The Democrats, however, have always been the party of division and hate, since their history as the party of racism, racial supremacy, the first Confederacy, Jim Crow and racial segregation with the same name, Ku Klux Klan, to their "modern" and not less divisive and hateful political correctness and wokeism, neo-puritanism, feminism (misandry), anti-America and West rhetoric, narrative and propaganda, Critical Race Theory (or simply "racism"), "reverse racism" (again, just "racism"), "anti-racist" racial segregation, promotion of pedophilia, child grooming, child transgenderism and puberty blockers, and support, creation and funding of terrorist and marxist/islamic/racial supremacist groups and organizations (Antifa, BLM, ISIS).

To his further credit, Musk describes himself as a "free speech absolutist,"[10] and announced that he will end Twitter's ban on Donald Trump.

Musk companies are thriving due to government subsidies. Tesla Motors and SolarCity have taken a huge financial hit in 2016. Both these companies are based on the green energy movement and are being punished by the markets due to extremely low oil prices. Musk lost a personal fortune upwards of $4 billion. In 2017, Tesla Motors would acquire all of SolarCity stocks. The highly anticipated Tesla Model 3 starts shipping at the end of July. The stock valuation of Tesla, which may be due to its software development, far exceeds that of GM, Ford, and Chrysler.

He smoked the marijuana during an appearance on the Joe Rogan podcast.[11]

Elon Musk indicates that he does not pray to or worship any divine being. However, he asked "any entities that [were] listening" to "bless [the] launch" before the important Falcon 1 launch by SpaceX, a company he founded in 2002.[12]

During California's CCP global pandemic lockdown, according to The Verge Musk said,

If somebody wants to stay in the house that’s great. They should be allowed to stay in the house and they should not be compelled to leave. But to say that they cannot leave their house and they will be arrested if they do… this is fascist. This is not democratic. This is not freedom. Give people back their g*****n freedom … Everything people have worked for all their lives is being destroyed in real time. I think the people are going to be very angry about this and are very angry.[13]

In 2021, he mocked far-left Senator Elizabeth Warren and called her "Senator Karen."[14]

In 2022, Musk acquired a 9% stake in Twitter, and subsequently its Board accepted a buy-out offer by Musk. But the deal has been slow to complete and there is a relatively low penalty if Musk abandons it. After discovering that Twitter has been underreporting the number of its "false and spam accounts," Musk terminated his deal to purchase Twitter on July 8, 2022.[15]

On April 25, 2022, it was announced that Musk had purchased social media platform Twitter for $43 billion, with the intent of ending liberal control of the platform (along with its related censorship and silencing of conservative voices and factual information in favor of promoting and encouraging liberal voices) and restoring free speech.[16] Earlier in the month, Musk had become the biggest single shareholder of Twitter (with 9.2% of the shares, well over the 2.25% held at the time by Twitter co-founder and former CEO Jack Dorsey) when he bought 73 million shares of stock in the company (worth $2.89 billion),[17] but when he attempted to buy more shares, he ran into resistance from several Saudi Arabian Twitter shareholders, which caused Twitter stock to fall.[18] To prevent Musk from buying more shares, Twitter tried to entice him with a seat on its board of directors as part of a deal that would keep him from owning more than 14.9% of its common stock,[19] but Musk turned down that offer, thereby allowing him to buy more Twitter stock.[20] In response, bitter leftist Twitter shareholders attempted to sue Musk for delaying in disclosing the amount of stock he owned in the company.[21]

When Musk announced plans to purchase Twitter outright and turn it into a private company,[22] pro-censorship/anti-free speech leftist company management decided to attempt to implement a "poison pill" to sabotage the transaction and fight for censorship and silencing of conservative voices and allowing the voices of liberals and other enemies of freedom to flourish[23] rather than allow Musk, who is anti-censorship and favors free speech, to buy the company and put an end to that censorship.[24] In response to the "poison pill" move by Twitter, Florida Governor Ron DeSantis threatened to hold the company's board of directors legally accountable for breaching their fiduciary duty.[25] Musk later announced that he would be bringing investor partners into his Twitter bid to thwart the company's "poison pill" sabotage attempt, whose legality was questioned by the Gateway Pundit.[26] In an attempt to protect Twitter and its anti-free speech mandate against a Musk takeover, the Biden regime-controlled Department of Justice and the Securities and Exchange Commission tried to step in by launching frivolous sham investigations against Musk.[27]

When Musk's purchase of Twitter became official, pearl-clutching liberals went into meltdown mode[28] over their loss of control of one of their means of censoring free speech and silencing conservative voices/opinions and factual information.[16] President Donald Trump congratulated Musk on his purchase of Twitter, saying of him "...I hope Elon buys Twitter because he’ll make improvements to it and he is a good man," but he added that he will not return to Twitter, even with the restoration of his account there, choosing instead to stay with his own social media platform Truth Social.[29] As part of the announcement of his Twitter purchase, Musk said, "Free speech is the bedrock of a functioning democracy, and Twitter is the digital town square where matters vital to the future of humanity are debated...", adding in a tweet that "I hope that even my worst critics remain on Twitter, because that is what free speech means".[30] Among the liberals having tantrums over Musk's purchase of Twitter are actress and leftist activist Jameela Jamil, who rage-quit the platform over the announcement in a petulant tweet,[31] liberal race activist Shaun King (a white man who claims to be "black"), who also threw an online hissy-fit and rage-quit Twitter via deletion of his account in response to the Musk purchase,[32] and other prominent liberals with online presences such as Joy Reid, Howard Dean, NBC "journalist"/hack Ben Collins, CNN hack Brian Stelter, former Twitter employees Israel Camacho and Laura Gomez and several members of hate group Antifa.[33]

In August 2018, reporters at leftist rags like The New York Times and other publications received word Elon Musk was relying on Jeffrey Epstein to advise him on whom to consider hiring as board chair or chief executive. Editors at the Times sent business columnist James Stewart to talk to Epstein. "I wondered why would Musk, if this is true, be using a registered sex offender to recruit new members to the board," Stewart told The Kicker, a podcast from the Columbia Journalism Review. Stewart wrote that Epstein said, "criminalizing sex with [barely] teenage girls was a cultural aberration and that at times in history it was perfectly acceptable."[34][35] However, not only the victims he was talking about, when they weren't prepuscent children,[36] were barely teenagers pretty under the average age of consent in US and North America, but accuser Virginia Robert Giuffre revealed that Epstein kept her and other girls on extreme diets to keep them looking still "prebubescent" so to abuse them.[37][38][39][40][41]

Despite being a proponent of freedom of speech online, Musk has tweeted support for the Chinese Communist Party and has even published articles in a magazine run by China's internet censorship agency.[1][2]

After lending aid to Ukrainian Nazis in early 2022, Musk withdrew his support in October amidst much criticism and controversy.[42]

In the past I voted Democrat, because they were (mostly) the kindness party.

But they have become the party of division & hate, so I can no longer support them and will vote Republican.

Now, watch their dirty tricks campaign against me unfold …

In June 15 2022, Elon Musk announced that he voted to Mayra Flores in Texas, and that was first time to vote for Republican candidate. He also said that he supports Red Wave in November,[44] and he is leaning toward Ron DeSantis in 2024 presidential elections.[45]