Born on Leap Day, 1940, Kazen was descended from immigrants from Lebanon. His parents were E. James Kazen (1912-2003) and the former Drusilla Marie Perkins (1917-2011), a native of Sioux City, Iowa. James and Drusilla met at the University of Texas at Austin, where both were students. James Kazen was subsequently a long-term Democratic district attorney and district judge for the 49th Judicial District of Texas. Drusilla Kazen, known as "Duchess" Kazen, was the daughter of Samuel Julien Perkins and the former Marion McDermott. She was the last surviving grandchild of Republican U.S. Representative George D. Perkins, also the publisher of The Sioux City Journal. Drusilla Kazen was a dancer who studied under Valentina , the dancer, actress, and fashion designer.[1]

In 1960, George Kazen received a Bachelor of Business Administration degree from the University of Texas. In 1961, he obtained his Juris Doctorate degree from the University of Texas School of Law. He was the case-note editor of the Texas Law Review and graduated with honors as UT Law’s Grand Chancellor, an award presented to the student with the highest-grade point average. In 1961, he passed the Texas bar examination with the highest score recorded in fifteen years. He was a briefing attorney for the Texas Supreme Court from 1961 to 1962, and was from 1962 to 1965 a captain in the United States Air Force, Judge Advocate General's Corps. He practiced law with the firm Mann, Freed, Kazen & Hansen from 1965 go 1979 before he was named judge.[2]Laredo federal judge retires after nearly 40 years on the bench (expressnews.com), March 13, 2018, accessed May 1, 2021.</ref>

On March 7, 1979, Kazen was nominated by U.S. President Jimmy Carter to a new seat on the federal court for the Southern District of Texas created by 92 Stat. 1629. On May 10, 1979, Kazen was confirmed by the United States Senate, and he received his commission of office the following day. He served as chief judge from 1996 to 2003. Kazen served as a member of the United States Foreign Intelligence Surveillance Court from 2003 to 2010. He assumed senior status on May 31, 2009 and remained in that capacity for nine years.[2]

Judge Kazen was the founding president of Laredo Legal Aid, since renamted Texas Rio Grande Legal Aid. In 1970, the Jaycees named him the city's "Outstanding Young Lawyer." He served as the president of the Laredo Bar Association from 1976 to 1977. He was a trustee of Laredo College from 1972 to 1979 and a member of the Laredo Chamber of Commerce.[2] He was a legal educator too, having served as institute director of the Federal Sentencing Institutes from 1997 to 1998 and Tri-Editor of the Federal Practice Guide. From 1990 to 2003, he was an adjunct professor at St. Mary’s University School of Law in San Antonio, where he taught federal civil procedure.[2]

In 2007, former Laredo police chief Agustin Dovalina, III, pleaded guilty before Judge Kazen to taking bribes from the owner of a gaming room. He served three year of confinement.[3]

In 1961, Kazen married the former Barbara Ann Sanders (January 3, 1941 – March 15, 2011), a civic leader born in Abilene, Texas and later resident of Albany in Shackelford County in central Texas.[4] She was known for her humanitarian efforts, including the promotion of the American Cancer Society, United Way, the Laredo Homeless Coalition, and Bethany House, a downtown settlement house which provides basic meals and temporary housing for the indigent. She was director of Bethany House from 1996 until her death of brain cancer at the age of seventy. Kazen also has a sister named Barbara Anne Kazen, but with a slightly different spelling of the middle name; she resides in Santa Fe, New Mexico. His three other siblings are Virginia Kazen Van Steenberg of San Antonio, James Douglas Kazen of Boerne, west of San Antonio, and Felisa Kazen of New York City.[1] 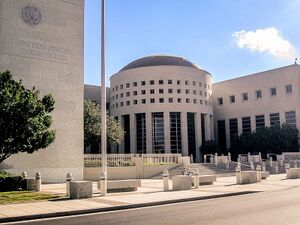 Kazen's uncle, Abraham Kazen, was a Democratic member of the United States House of Representatives from 1967 to 1985, until he was unseated in the 1984 primary election by the more liberal Albert Bustamante of San Antonio.

In 2015, Republican U.S. Senator John Cornyn and U.S. Representative Henry Robert Cuellar proposed that the U. S. District Court building in Laredo, next to the Webb County Courthouse, be named in Kazen's honor.[7] The change became official in November 2018, a few months after Judge Kazen left the beach after a judicial career of thirty-nine years, twenty as the lone federal judge in Laredo.[2]