Starting off in Chicago Republican politics Ickes campaigned for Theodore Roosevelt's Progressive party in 1912 and for the presidential campaigns of Republican nominee Charles Evans Hughes (1916) and presidential hopeful Hiram Johnson in 1920.

He was an important figure in the New Deal, as Secretary of the Interior (1933–46) and administrator of the Public Works Administration (1933–39).

He was born on March 15, 1874, in Frankstown Township, Pennsylvania.[1] He was the son of Matilda and Jesse Boone Williams Ickes. In 1897, he graduated from the University of Chicago. After a short stint as a reporter for the Chicago Tribune, he earned a law degree from the University of Chicago Law School. His career in law was short lived, but one notable case was the death of Lazarus Averbuch.[2][3][4] He moved into public service shortly after.

The PWA allotted $3.3 billion to be spent on the construction of public works as a means of providing employment, stabilizing purchasing power, improving public welfare, and contributing to a revival of American industry. Most of the spending came in two waves in 1933–35, and again in 1938. It was closed down in 1939.

Roosevelt used a "competitive administration" strategy to maximize presidential power at the cost of confusion, delay and inefficiency. He made sure in each policy area that several people had overlapping jurisdictions. They would feud and have to bring the problem to FDR, who wanted to make every final decision. In the case of the PWA, the competition over the size of expenditure, the selection of the administrator, and the appointment of staff at the state level, led to delays and to the ultimate failure of PWA as a recovery instrument. As director of the budget, Lewis Douglas overrode the views of leading senators in reducing appropriations to $3,500,000,000 and in transferring much of that money to other agencies in lieu of their own specific appropriations. The cautious and penurious Ickes won out over the more imaginative Hugh S. Johnson as chief of public works administration. Political competition between rival Democratic state organizations and between Democrats and Progressive Republicans led to delays in implementing PWA efforts on the local level.[5]

Ickes was a conservationist who controlled the National Park Service as well as vast stretches of federal land in the west. who favored building efficient dams to stop floods and generate electricity, instead of wasting water power.

Ickes was cantankerous, and engaged in a long feud with Henry C. Wallace, Secretary of Agriculture, over control of the Forest Service, which also controlled vast stretches of land in the west. Meanwhile, Wallace tried to move the Grazing Service from Interior to Agriculture. It was another example of Roosevelt's "competitive administration" strategy.

Ickes strongly supported civil rights and equal opportunities for African Americans. Ickes instituted minimum quotas –on average, 10%--for hiring skilled and unskilled blacks in construction financed through the PWA. Otherwise few blacks would have been hired. Resistance from employers and unions was partially overcome by negotiations and implied sanctions. Although results were ambiguous, the plan helped provide blacks with employment, especially among unskilled workers.[6]

The New Deal attempt at resettling very poor farmers climaxed at the Arthurdale experiment in West Virginia. Eleanor Roosevelt was in charge of the project from the beginning, seeing it as a way to combat the poverty of the unemployed miners and as a way to forestall the spread of communism. She had no end of troubles with Congress over money and with administrators such as Harold Ickes and Rexford Tugwell. The project was attacked from the Right as a threat to free enterprise and from the Left as a mechanism to decentralize poverty. The population of Arthurdale remained on relief throughout the 1930s until the war, when a defense plant was located there. In 1946 Arthurdale and the other resettlement communities were sold by the government.[7]

In 1938, Roosevelt instructed the Federal Power Commission and the War Department to survey the Nation's wartime power capacity. They found an acute potential shortage and recommended partnership between government and private power in overcoming the shortage through construction of a high transmission network. This was to be implemented by a National Defense Power Committee under Louis Johnson. However, Ickes feared Johnson would sell out the public power interest and thought the government might develop the resources alone. He got Johnson elbowed aside, had himself put in charge of another committee to supervise the project, and feuded with George W. Norris, David E. Lilienthal, and others. Discouraged, FDR used the FPC to bypass Ickes with a proposal to have the Reconstruction Finance Corporation finance plant expansion. War needs took priority over advancement of public power, but the United States entered war with a deficient power system.[8]

During World War II, Ickes was in charge of national oil policy. His goal was to ensure an adequate petroleum reserve for national security. He believed it a mistake to rely only upon private companies, since their interests were not always those of the nation. Nevertheless, he involved representatives of major firms in planning and the management of the Petroleum Administration for War (PAW). He also strongly supported the establishment and aims of the short-lived Petroleum Reserves Corporation for whose demise, however, he must bear some responsibility.[9] 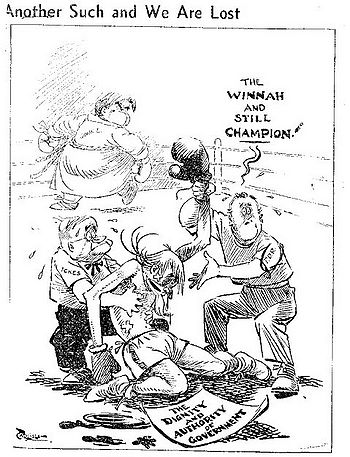 John L. Lewis called for the organization of illegal coal strikes in 1943 to raise wages; he made a fool out of Ickes and FDR and showed the weakness of the government; editorial cartoon by Carlisle in the Monrovia News-Post

His son is Harold M. Ickes, who was deputy chief of staff for President Clinton.