From Conservapedia
(Redirected from Integration)
Jump to: navigation, search

Not to be confused with Integralism.

An integral is a mathematical construction used in calculus to represent the area of a region in a plane bounded by the graph of a function in one real variable. Definite integrals use the following notation:

Indefinite integrals use the notation

is a function of bounded variation, then the Riemann integral of

is defined as the limit of a Riemann sum:

. For integration of measurable functions which may not have bounded variation, the Lebesgue integral must be used. It is easy to see that

The first part of the Fundamental Theorem of Calculus states that integration is the reverse function of differentiation. Thus, if

Note that, because the derivative of any constant function is 0,

does not simply equal x2, but rather x2 + C for any constant real number C. The above-mentioned functions are the family of antiderivatives for 2x.

The concept of integration can be extended to functions in more than one real variable, as well as functions defined over the complex numbers.

For a more detailed treatment, see Methods of integration.
There are many different ways to integrate functions. Sometimes, when it is impossible to directly integrate a function, an approximation is used, such as the Riemann integral. Or, there may be a process to integrate the function using a rule, such as with Integration by parts.

Integration has the following properties[1]

If an integral contains two functions added together, it may be rewritten as two separate integrals, each containing one function.

If an integral contains a function multiplied by a constant, it may be rewritten as the constant times the integral of the function.

Any integral that contains the same upper and lower bounds is equal to zero.

An integral may be rewritten as the sum of two integrals with adjacent bounds.

Any integral is equal to the additive inverse of the same integral with reversed upper and lower bounds.

The integral of a function can be evaluated using its antiderivative,

This works for the kind of functions encountered in late high school and early university mathematics. It is, however, an incomplete method. For example, one cannot write the anti-derivative of

in terms of familiar functions (such as trigonometric functions, exponentials, and logarithms) and function operations.

these two series become the integral. If they approach the same value then the integral exists, otherwise it is undefined.

For a more detailed treatment, see Simpson's rule.
Simpson's Rule is an extension of the Riemann integral. Instead of using shapes such as rectangles or trapezoids, Simpson's Rule allows for the use of parabolas or other higher order polynomials to approximate integrals. 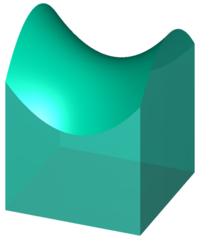 A double integral gives the volume under a function over a given area - here, the area under the function (at top) within a square.

and for triple integrals,

These functions can be integrated with respect to the variables x, y, and z in any order. For example, the double integral above is also equivalent to

The Lebesgue integral is usually introduced in late university or early postgraduate mathematics. It is naively described as rotating the Reimann integral, in that it is the range instead of the domain that is partitioned. An understanding of measure theory is required to understand this technique.

Because the rationals are only countable, this function is zero "almost everywhere": there are far more irrationals than rationals, and the function is

at all of these. Thus we would expect that

Unfortunately, this function has so many discontinuities that its Riemann integral is not defined. However, if we use the Lebesgue integral instead, the function is integrable as hoped, and has the expected value