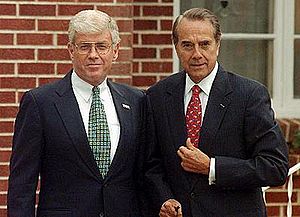 Jack Kemp (July 13, 1935 – May 2, 2009) was a congressman from the Buffalo area who led the movement for tax cuts in the 1980s. His legislation, entitled the "Kemp-Roth" tax cuts, embodied the insight of supply-side economics that cutting taxes could both help the economy and increase government revenue. A former star quarterback in the fledgling American Football League, Kemp ran unsuccessfully for President in 1988 and was the unsuccessful Republican nominee for the Vice President in 1996. He also served for four years as the Secretary of Housing and Urban Development (HUD) under President George H.W. Bush. His supply-side Kemp-Roth bill during the Reagan era enacted a 23% tax cut over three-years and led to what was the most prolonged economic expansion of modern times.

Solidly conservative as a congressman and candidate for higher office, Kemp continued to help conservative candidates and causes. But in March 2006 he co-chaired a project with liberal Democrat John Edwards for the Council on Foreign Relations on the topic of Russia's future and what the United States "can and should do."[1]

Upon his death, the Kemp family released a statement: