John Robert Bolton (born November 20, 1948, age 73) is a neocon who was surprisingly picked to serve for a brief time as the National Security Advisor in the Trump Administration despite obvious ideological disagreements; apparently his appearances on the generally neoconservative Fox News Channel got him the job until he was inevitably fired for constantly advocating for war as neocons do. Bolton was also a senior fellow at the American Enterprise Institute and is best known for his interim appointment to United States ambassador to the United Nations in 2005 and 2006, made necessary by intense liberal opposition to his confirmation by the U.S. Senate. He also served in a number of other political positions in the Reagan, Bush I, and Bush II administrations in the State Department, Justice Department, and the USAID.

Bolton is credited for persuading President George W. Bush for rescinding and thereby completely withdrawing the United States from the International Criminal Court, after President Bill Clinton had signed the U.S. up for that globalist court. On September 10, 2018, as National Security Advisor, Bolton announced that the U.S. would prosecute and sanction any judges or prosecutors in the ICC who took action against investigated Americans soldiers.

Democrat Rep. Adam Schiff has criticized Bolton for his "lack of credibility".[2]

Bolton had several diplomatic achievements throughout his career. At the United Nations in 1991, John Bolton overturned the United Nations General Assembly Resolution 3379 adopted in 1975 that condemns Zionism to be "a form of racism and racial discrimination." In the Bush Administration, he opposed the International Criminal Court and negotiated Article 98 agreements with, ultimately, over 100 countries to ensure Americans would not be prosecuted by the court. Also during the Bush Administration, Bolton played a key role in establishing the Proliferation Security Initiative. In addition to working at the AEI, Bolton served as the chairman of the Gatestone Institute and served with other organizations such as the National Rifle Association.

Bolton has clashed with both the State Department[3] and intelligence agencies,[4][5] both of which are major organs of the deep state. Despite this, he has advocated deep state positions on numerous occasions.

President Donald Trump appointed Bolton as his national security advisor in 2018,[6] replacing globalist H.R. McMaster. He took office on April 9, 2018. As national security advisor, Bolton defended U.S. sovereignty against international organizations such as the ICC.[7] He played a role in withdrawing the U.S. from the Iran nuclear deal.[8] Bolton was able to accomplish several other America First goals.[9] However, despite this, he has openly sided with the deep state on some issues. President Trump fired Bolton on September 10, 2019.[10] Since then, Bolton has publicly trashed Trump's foreign policy, and some speculate he may have been one of the sources for the anonymous whistleblower complaint regarding Trump's conversations with Ukrainian officials.[11][12]

On November 22, 2019, Bolton returned to Twitter, not having posted since the day of his firing. He accused Trump of attempting to silence him by suppressing his private Twitter account.[13]

Some have criticized him for his foreign policy stances: for example, national conservative Fox News host Tucker Carlson has claimed that, "John Bolton has always been a snake."[14] 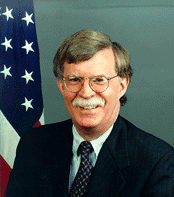 Bolton early in the Bush Administration

Bolton has taken an extremely hypocritical approach to the issue of sovereignty. While strongly supporting American sovereignty at home,[16] criticizing globalism by name and calling himself a "convinced Americanist",[17] Bolton's extreme pro-war stance has proven that he has virtually zero respect for the sovereignty of other nations.

Bolton opposes the European Union and supports Brexit.[18] Although he has publicly claimed that his positions relate to the EU's contempt for national sovereignty and self-governance, as well as its promotion of left-wing policies,[19][20] it is much more likely that his true motivation for opposing the EU is its potential challenge to global American geopolitical hegemony.

Bolton is relatively moderate-to-liberal on social issues, supporting abortion in certain instances and supporting same-sex "marriage".[21] He has criticized the International Criminal Court as a threat to U.S. sovereignty.[22] He considers himself a hawkish libertarian, one who supports the concept of national sovereignty.[23]

Despite the fact that he disagrees with neocons on several issues,[24] Bolton's rabid pro-interventionist positions have rightfully earned him the label of "neocon" from many conservatives.

Among other things, Bolton has, during his tenure as National Security Adviser alone:

According to Gareth Porter of The American Conservative, in May 2019 Bolton may have abused his power by using his position to unilaterally pressure Panama's National Security Council into withdrawing Panamanian flag status for the Iranian cargo ship Grace 1 while it was in the middle of a voyage, thus making unavoidable the ships confrontation with and subsequent (and illegal) seizure by the British navy in the Strait of Gibraltar, which is international waters.[37] This incident was likely an effort to provoke a war between Iran and the United Kingdom, which in turn would be used as justification for American military intervention.

As the Democrats partisan impeachment of President Trump foundered, Democrats and the liberal media pinned their hopes on the credible testimony of Bolton. Previously fake news media had this to say of Bolton:

John Bolton has been one of liberals’ top bogeymen on national security for more than a decade now. He seems to relish the role, going out of his way to argue that the Iraq War wasn’t really a failure, calling for U.S.-led regime change in Iran and preventive war against North Korea, and writing the foreword for a book that proclaimed President Obama to be a secret Muslim. He is a profoundly partisan creature, having started a super-PAC whose largest donor was leading Trump benefactor Rebekah Mercer [owner of Breitbart ] and whose provider of analytics was Cambridge Analytica, the firm alleged to have improperly used Facebook data to make voter profiles, which it sold to the Trump and Brexit campaigns, among others.
Recently Bolton’s statements have grown more extreme, alarming centrist and conservative national-security professionals along with his longtime liberal foes. He seemed to say that the United States could attack North Korea without the agreement of our South Korean allies, who would face the highest risk of retaliation and casualties; just two months ago he called for a regime change effort in Iran that would allow the U.S. to open a new embassy there by 2019, the 40th anniversary of the Iranian Revolution and the taking of Americans hostage in Tehran. His hostility toward Islam points toward a set of extreme policies that could easily have the effect of abridging American Muslims’ rights at home and alienating America’s Muslim allies abroad.[38]

Bolton has attempted to publish a book which contains classified information.[40] In his book, Bolton criticized Congressional Democrats for focusing only on Ukraine during the impeachment proceedings, citing other alleged acts of misconduct by the President.[41]

Although Bolton has stated that he will not vote for Joe Biden, he has also implied that a Biden presidency would be preferable to a second term for Donald Trump.[42][43]

In July 2022, Bolton admitted during a CNN interview that he has been directly involved in the plotting of at least coup. When asked to elaborate by Jake Tapper, Bolton didn't go much further, although he did briefly mention the failed coup attempt against Nicolas Maduro in Venezuela which took place in April 2019. These remarks earned widespread criticism on both sides of the political spectrum, with Rand Paul in particular tweeting that one of his "proudest moments" was blocking efforts to get Bolton appointed as Trump's Secretary of State.[1][2] Bolton in turn responded by referring to his critics as "snowflakes."[3]