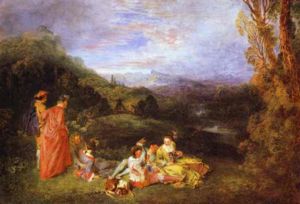 Love is one of the basic emotions, described as an extreme affection for a person, an object, an idea, a country, a friend or a family member. Love is used to describe affection for many different things, but can sometimes be misinterpreted for Lust.

Many faiths, such as Christianity, Judaism, Buddhism, etc., believe love to be a positive trait, and the followers of these religions are asked to practice love for others as a general principle for a good life.

The fifth form of love is called Narcissism, or self-love. This word comes from the Greek myth of Narcissus, who fell in love with his own reflection. Although Freud considered that everybody has some degree of narcissism, and that this is present in us from birth,[4] if taken to extremes narcissism can be considered a personality disorder. [5]

For God so loved the world that he gave his one and only Son, that whoever believes in him shall not perish but have eternal life.

Know therefore that the LORD your God is God; he is the faithful God, keeping his covenant of love to a thousand generations of those who love him and keep his commands.

I love those who love me, and those who seek me find me.

Henry Drummond referred to 1 Corinthians 13:4-7 when he wrote,

As you have seen a man of science take a beam of light and pass it through a crystal prism, as you have seen it come out on the other side of the prism broken up into its component colors—red, and blue, and yellow, and violet, and orange, and all the colors of the rainbow—so Paul passes this thing, Love, through the magnificent prism of his inspired intellect, and it comes out on the other side broken up into its elements.

The Pauline definition in 1 Corinthians 13:4-7:

4 Charity suffereth long, and is kind; charity envieth not; charity vaunteth not itself, is not puffed up, 5 Doth not behave itself unseemly, seeketh not her own, is not easily provoked, thinketh no evil; 6 Rejoiceth not in iniquity, but rejoiceth in the truth; 7 Beareth all things, believeth all things, hopeth all things, endureth all things. (KJV)

Love never gives up.
Love cares more for others than for self.
Love doesn’t want what it doesn’t have.
Love doesn’t strut,
Doesn’t have a swelled head,
Doesn’t force itself on others,
Isn’t always “me first,”
Doesn’t fly off the handle,
Doesn’t keep score of the sins of others,
Doesn’t revel when others grovel,
Takes pleasure in the flowering of truth,
Puts up with anything,
Trusts God always,
Always looks for the best,
Never looks back,
But keeps going to the end. (The Message)

In the early Christian writer Clement's Epistle to the Corinthians, we read:

Love unites us to God. Love covers a multitude of sins. Love beareth all things, is long-suffering in all things.There is nothing base, nothing arrogant in love. Love admits of no schisms: love gives rise to no seditions: love does all things in harmony. (John Keith)

Charity unites us to God; charity covers the multitude of sins: charity endures all things, is long-suffering in all things. There is nothing base and sordid in charity; charity lifts not itself up above others; admits of no divisions; is not seditious; but does all things in peace and concord. (Wake)

Love unites us with God; love covers a multitude of sins; love endures everything, is long-suffering to the last; there is nothing vulgar, nothing conceited, in love; love creates no schism; love does not quarrel; love preserves perfect harmony. (Quasten and Plumpe)

Atheism and its inability to explain love

From a metaphysical, moral and spiritual perspective, atheists have an inability to satisfactorily explain the existence of love.[9][10] See: Atheism and love