Michael Francis Moore (born April 23, 1954) is an obese left-wing[1] demagogue, filmmaker, "anti-capitalist", and a conspiracy theorist. Moore is critical of the U.S. government, and said he merely likes America "to some extent" in reply to the question "You do not seem to like the U.S., do you?"

Moore's films and television programs represent some of the most egregious examples of deceitful liberal propaganda in contemporary American political discourse. Former Iranian President Mahmoud Ahmadinejad has become the most high-profile international proponent of the theories of Michael Moore.

Moore is said to be an Eagle Scout and a lifetime member of the National Rifle Association.

Moore produced a movie portraying President George W. Bush as part of a massive conspiracy, named Fahrenheit 9/11. The contents of the film were systematically shown to be untrue, maliciously edited, and bordering on treasonous by an independent study.[3]

Moore's movie "Bowling for Columbine", which used the Columbine school massacre as a starting point, won the Academy Award for Best Documentary. Some of his other work includes the anti-corporate film Roger and Me and the books Dude, Where's my Country, Downsize This! Random Threats from an Unarmed American and Stupid White Men.

Moore has also been accused of mocking the accents of South Asian Indians.[12]

Michael Moore's films have grossed worldwide in excess of $200,000,000.00 under the free market capitalist system. A breakdown for just the United States of America is below.

According to Reuters in June 2007, Moore is reported to have hidden assets in Canada in reaction to an official investigation. Moore was operating offshore in Cuba allegedly as a "journalistic endeavor." The United States Treasury Department does not confirm or deny the existence of investigations.[19]

In 2004, Moore warned that if Bush was re-elected as President: "...he's going to bring back the draft. He will be forced to. Because, thanks to his crazy war, recruitment is going to be at an all-time low. And many of the troops stuck over there are NOT going to re-enlist. The only way Bush is going to be able to staff the military is to draft you and your friends. Parents, make no mistake about it - Bush's second term will see your sons taken from you and sent to fight wars for the oily rich."[22] Over four years later, the draft had not been reintroduced.

Co creator of South Park, Matt Stone, was very critical of Moore's Bowling for Columbine because of animated segment which was played shortly after Moore's interview with Stone, which featured a similar animation style to South Park. Stone alleged that Moore was trying to make it seem as if he and fellow South Park creator Trey Parker had created the cartoon, which they did not. Matt Stone criticized the short as being "anti- American".

Speaking of the Afghanistan war, Moore wants to end the war and give victory to the Taliban. In a letter addressed to Obama, Moore writes, "It is not your job to do what the generals tell you to do." [23]

After Nancy Pelosi infamously tore up her copy of the 2020 State of the Union address in front of live cameras at its conclusion, Michael Moore tweeted his support towards her disgraceful actions.[24] 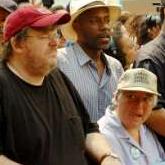 Michael Moore's official website [1] put an image and name of a Wikipedia® editor on its main page with links to edit both Wikipedia's article on Sicko and the Wikipedia editor's user page. Wikipedia policy explicitly states,