From Conservapedia
(Redirected from NFL)
Jump to: navigation, search 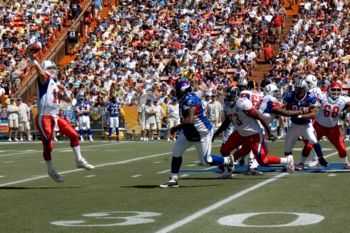 NFL quarterback Peyton Manning of the Indianapolis Colts attempts a pass at the 2007 Pro Bowl.

The National Football League (NFL) is a professional sports league for American football in the United States. It is one of the four major sports leagues in the United States (the others being MLB, NBA, and NHL, though the NFL has never had a franchise in Canada). More so than other televised sports, the NFL encroaches on religious holidays such as Christmas and Thanksgiving, when it reportedly drew 42 million viewers in 2022.[1]

The league began to supplant baseball as America's most popular spectator sport in 1958, when the then-NFL Championship Game between the then Baltimore Colts and the New York Giants was broadcast nationwide (though ironically not in New York City) and ended in a sudden-death overtime win by the Colts. Today NFL franchises are a leading example of crony capitalism,[2] such that team owners rake in billions of dollars by milking taxpayers and promoting vices like beer and gambling. The NFL has $110 billion in media deals annually, and yet supports shockingly little charity. Far more people are harmed by the NFL than genuinely helped by it.

However, the league is not without controversy: teams routinely fleece taxpayers to build new stadiums then keep nearly all the revenue earned (even from non-football events such as major concerts), the league itself promotes gambling (via both fantasy football and sports betting), and players routinely suffer serious injuries (concussions being the most common) which have life-altering effects and, in some cases, have led to deaths (not only the players but innocent parties, the case of murders allegedly committed by Aaron Hernandez among the most prominent).

The NFL was originally formed in 1920 as the American Professional Football Association and adopted its current name in 1922. Only two teams which were charter members of the league remain in operation today: the Chicago Cardinals (now the Arizona Cardinals) and the Decatur Staleys (now the Chicago Bears).[3] Then Staleys coach (and owner) George Halas is credited with being the father of the league and is compared to George Washington by many enthusiasts of the game.

During its existence it has merged with all or parts of three rival football leagues (unlike the NBA and NHL, the individual and team records of these franchises is recognized by the NFL):

Otherwise, the league has grown through expansions into new markets, which has proven tremendously successful: as an example it expanded into Dallas in 1960 with the Dallas Cowboys franchise, which is the league's most valuable and among the most valuable of all sports franchises worldwide. It is also very active in teams relocating to other markets (and sometimes returning, such as the Rams franchise moving from Cleveland to Los Angeles, then moving to St. Louis and then returning back to Los Angeles).

Unlike Major League Baseball, the NFL does not have a special exemption from antitrust laws (the NBA and the NHL also lack such), and thus it has faced competition from rival leagues. In addition to the leagues mentioned above, notable rivals included the United States Football League (which, in 2022, is attempting a second iteration), the XFL (notable for its association with the professional wrestling organization WWE; its second iteration ended before a single game was played), the Association of American Football, and an attempted expansion into United States markets by the Canadian Football League (with its differing rules and field dimensions).

The league is composed of 32 professional football teams from the United States (of the four major professional sports leagues it is the only one not to have a team located in Canada, and in its long history never has), divided into two conferences (the American and the National), each of which have four, four-team divisions. Although the divisions have "directional" names (East, North, South, and West) they have little meaning geographically (for example, the NFC East is comprised of the New York Giants, Philadelphia, Washington and Dallas, notwithstanding that Carolina is further east and geographically closer than Dallas to the other three teams) and much to do with rivalry and media (the aforementioned NFC East comprises four top-10 media markets, and all four teams have long-standing historic rivalries with each other; Dallas-Washington -- involving two of the world's most valuable sports franchises in any league -- being the most well-known).

Each team is permitted to have 55 players on its roster; however, only 48 may be active (eligible to play) on game day. Each team is also allowed 12 additional players on a "practice squad"; any team can sign a player from another team's practice squad to its main roster without compensating the other team. A player may be elevated from the practice squad to the roster (and returned) only twice during a season; on the third elevation the player must remain on the roster for the remainder of the season.

The NFL has a strict salary cap rule: before each season it announces the amount each team can spend on all players (including payments to players no longer on the roster) and, unlike other leagues which have exceptions or luxury taxes, the amount announced is the true maximum which can be spent. It does not, however, have a salary floor (a minimum amount which must be spent), but most teams are at or near the cap.

The NFL does not operate a minor league system nor does it have working arrangements with any other football league (such as the Canadian Football League) for player development. A player may be drafted (or, if not drafted, sign as an undrafted free agent) once the player has been out of high school for three seasons. A player may declare himself eligible for the draft and is permitted a window whereby he can revoke his decision, except if the player has signed with a sports agent the decision is irrevocable.

Teams play 17 regular season games (eight at home and eight on the road, with the 17th game alternating each year home and away) over 18 weeks, with each team receiving a "bye" week roughly in the middle of the season. The games are scheduled as follows:

As an example, the Green Bay Packers finished first in the NFC North after the 2020 season. They therefore played the following teams during the 2021 season:

The season generally begins on the Thursday after Labor Day (traditionally, the Super Bowl champion plays in this game) and concludes the week after Christmas. Most games are played on Sunday (starting generally at 1PM Eastern time, 4PM Eastern time which usually features a matchup between teams of prominence along with teams playing on the West Coast, and an 8PM "national" broadcast; the league reserves the right to "flex" teams into this slot if the game would have an effect on playoff contention), with one or more games played on Monday and on Thursday as well (however, there are no Monday night games played on the final week of the season). Games are not played on Friday or Saturday during most of the season due to federal laws prohibiting NFL games competing with high school or college games; the league will play some Saturday games once the college football season ends and has very rarely played on Friday. It does not play games on Wednesday and did not on Tuesday, though in 2020 and 2021 some games were moved to Tuesday due to COVID-related issues involving one or both teams.

At season's end, seven teams from each conference (the winners of each division and three "wild-card" teams which are the teams in each conference with the best record among non-division winners), or 14 teams total, make the playoffs.

The playoff consists of four rounds:

The 18 teams which do not make the playoffs, in strict reverse order of finish, receive the first 18 picks in each of the seven rounds of the subsequent NFL Draft (the NFL does not use a "lottery" system like the NBA), the remaining 14 teams receive their picks based on playoff success, with the Super Bowl champion receiving the last pick in each round.

Draft choices can be freely traded between teams subject to league rules (or, if a team is disciplined for conduct, can be forfeited). Teams are also awarded "compensatory" picks for players who sign as free agents with other teams; the picks are awarded at the end of rounds 3-6 depending on the salary paid to the former player. Also in an attempt to create "racial diversity" in the higher ranks of franchise management (head coach or general manager), teams who lose minority staff to other teams (as either head coaches or general managers) are awarded picks (third round, after free agent compensatory picks) for two consecutive years for one person, or three consecutive years for two or more persons.

In its televised form, the combination of uncertainty, patterns of multiple moving players, violence, and emotional gambling is highly addictive in some people, and has been described by many as demonic.

The NFL is a politically correct sports league that is subsidized by taxpayers to the tune of $1 billion per year, and is so heavily influenced by the liberal media that Christian players are typically not even allowed to express their faith. The league relies heavily on emotional gambling and monetary gambling, as well as violence, for its popularity among television viewers. Due to its dependence on the pro-gay media, the NFL typically promotes the homosexual agenda. While fining its players for doing various acts of self-expression, including patriotic and pro-police acts, the NFL does not fine players for dishonoring the United States, our flag, and our anthem.[4]

The NFL is the only sports league that excludes a player for quoting frequently from the Bible, as the NFL apparently did in banishing Tim Tebow despite his success when allowed to play.

Poor cities are routinely looted by NFL owners under threat of moving the team to another location, which leaves the cities with huge bills to pay on empty stadiums. Minneapolis taxpayers had to pony up $500 million in 2012 to prevent the Minnesota Vikings from moving to Los Angeles (only to end up with a stadium which is highly criticized for being an environmental disaster, as its glass -- which lacks non-reflective coating, removed as a "cost-cutting measure" -- attracts migratory birds to their deaths), and $350 million in taxpayer funding was not enough for St. Louis to keep the Rams (and taxpayers are also paying to sue the Rams for leaving; ultimately a partial settlement was reached on behalf of the taxpayers). The city of Pontiac, Michigan, has had to sue to seek repairs of safety and zoning violations at the abandoned Pontiac Stadium, which hosted the Super Bowl in 1982.

No other sports league bilks the taxpayers as much as the NFL does, as nearly every current stadium was built using millions of dollars in taxpayer funding.[5] "Taxpayers have spent nearly $3 billion on the 16 stadiums that" hosted the NFL games that opened the 2015 season.[5] "Field of Schemes" is a website that exposes many of these ripoffs of the public by the NFL, such as how the Democrat governor of Missouri was "proposing to hand $400 million to [the] Rams owner," including $100 million to pay off the debt on the last stadium that was built for the team.[6]

As an NFL game ends and fans begin leaving the stadium, it is best to avoid the nearby roads. One study showed that the average fan at many NFL games has a blood-alcohol level higher than safe level for driving as recommended by the NTSB.[7]

The NFL was recently listed as one of numerous leftist-controlled companies that have gone "woke" and now support the criminal rioters of Antifa and Black Lives Matter in the wake of the 2020 leftist riots.[8]