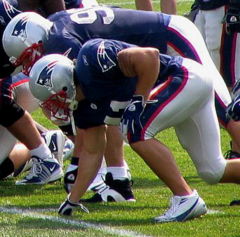 From 2001 to 2004, Ventrone attended Villanova University. While studying for a Finance major, he played in 35 games for the Villanova Wildcats (V.U. college football team), made 251 total tackles, two sacks, forced five fumbles and four fumble recoveries.[1] He was named to the Atlantic 10 All-Academic Team in his 2002, 2003 and 2004 seasons.

Ventrone entered the National Football League (NFL) in 2005 when he was signed by the Patriots as an undrafted rookie free agent a day after the 2005 NFL Draft.[2] After a successful training camp and preseason, he spent the entire 2005 season on the Patriots practice squad. Prior to the 2006 NFL season, Ventrone played in the NFL Europe and made ten starts at safety for the Cologne Centurions and statical totaled 41 total tackles, four forced fumbles and three fumble recoveries.[3] Due to injury's that occurred while playing in Europe however, he was placed on the Patriots injury reserve players list, forcing him to miss the entire 2006 season. On February 21, 2007, Ventrone was signed by the New York Jets[4] and played with the team in all four of their preseason games but was released from the team in the Jets final roster cutdown.[5] The Patriots signed Ventrone to their practice squad on September 19, 2007[6]