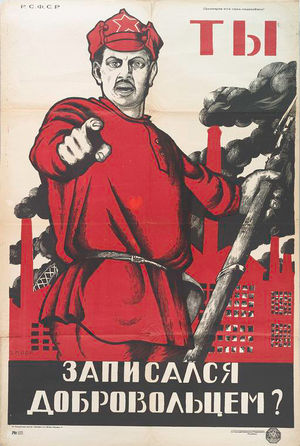 Red Army recruitment poster "Did you sign up as a volunteer?"

After the October Revolution, Vladimir Lenin ordered that the old army be demobilized and a new Red Army formed of Peasants and Workers. Lenin appointed Leon Trotsky as its commander. The new fledgeling army had to be assembled quickly in response to the White Army. Trotsky was effective in pulling the new army together, and later Lenin remarked, "Show me another man who could have practically created a model army in a year and win the respect of military specialists as well." The Red Army went on to defeat the White Army in the civil war.

At the outbreak of World War II, the Red Army had 1,800,000 soldiers, 10,000 tanks, and 5,000 front-line planes. Originally, the soldiers swore an oath to fight for international socialism. However, that was changed in January 1939. Men pledged "To protect with all his strength the property of the Army and the people and to cherish unto death his people, the Soviet homeland, and the government of Workers and Peasants, also, to respond at first call from the government of Workers and Peasants to defend the homeland, the U.S.S.R."

The Red Army conducted most of the fighting against Nazi Germany during the Second World War, inflicting about eighty percent of German casualties along the Eastern Front. Among its most successful commanders were Marshals Ivan Konev, Georgi Zhukov and Vasily Chuikov. Red Army losses were between 8 million and 11 million dead, while Soviet civilian casualties were between 8 million and 16 million dead as a result of the war.