In 2012, a Georgetown University study was published indicating that only about 30 percent of those who grow up in an atheist household remain atheists as adults.[1]

In 2012, a Georgetown University study was published indicating that in the United States only about 30 percent of those who grow up in an atheist household remain atheists as adults.[2] See also: Atheism and its retention rate in individuals

On the other hand, the Jehovah's Witnesses religion in the United States has a retention rate of 37 percent.[3]

Adherents of the Jehovah's Witnessses religion are well known for engaging in door-to-door proselytizing.[4] 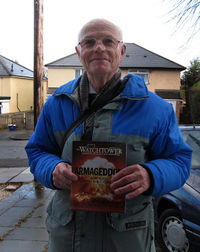 According to John Garghan, who took the photograph on the left of an adherent of the Jehovah's Witnesses faith who engages in door-to-door proselytizing in his neighborhood:

In the United States, atheists the majority of atheists seldom or rarely tell others about their atheism and atheists have a very low reputation among the public (see: Atheism and apathy and Views on atheists). The atheist Sam Harris said concerning the label of atheist, "It's right next to child molester as a designation."[7]

Some Jehovah's Witnesses are disfellowshipped/shunned due to congregational disciplinary measures imposed by congregation leaders, although they may be able to return to their congregation if they are repentant.

One of the factors which keep people within a particular ideology or religion is fellowship with like-minded individuals and the support of those individuals. In addition, a common code of ethics in order to better resolve conflicts.

There are factions within atheism and contention between those factions (see: Atheist factions).

Atheists have no agreed upon morality (see: Atheism and morality).

Atheists as a population filled with many socially challenged individuals

The Jewish comedian Henny Youngman joked about atheism, "I once wanted to become an atheist but I gave up . . . they have no holidays."[12]

According to the website Religion Facts: "One of the more well-known practices of the Jehovah's Witnesses is their non-celebration of holidays. All holidays, including birthdays, are considered "pagan holidays" and may not be observed by Witnesses."[13] The Jehovah's Witnesses religion does not celebrate Christmas or Easter.[14]