In 2010, the prominent atheists who attended the 2010 Global Atheist Convention, which included Richard Dawkins, were challenged to a debate by Creation Ministries International.[7] Richard Dawkins, PZ Myers and other prominent atheists refused to debate the creation scientists at Creation Ministries International.[8] Generally speaking, creation scientists tend to win the creation vs. evolution debates (see: Creation vs. evolution debates).

The refusal of Richard Dawkins and other prominent atheists to debate the staff of Creation Ministries International is not surprising given that there are several instances of Richard Dawkins avoiding strong debate opponents. In addition, creationists maintain that Richard Dawkins did not give a particularly strong showing at the Huxley Memorial Debate. One of the more embarrassing debates (particular the events surrounding the debate) was the case of Richard Dawkins losing a video taped debate to Rabbi Boteach according to the college audience.[9][10] After the debate, Richard Dawkins denied the debate ever took place and Rabbi Boteach provided the video taped evidence that the debate did take place.[11][12] Mr. Dawkins has declined to debate Rabbit Shmuley Boteach another time.[13][14] Incidentally, Paul Humber notes there was a deception that occurred during email correspondence with Mr. Dawkins concerning the tally of vote counts that occurred for the Oxford debate between creation scientists Professor A.E. Wilder-Smith and Professor Edgar Andrews and evolutionists Richard Dawkins and John Maynard Smith (see: Huxley Memorial Debate)[15] Mr. Humber did not indicate whether Mr. Dawkins committed the deception or was merely duped by someone who provided an altered account.[16] 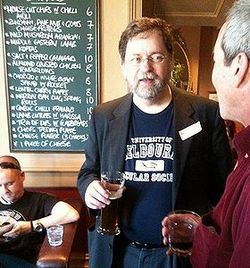 Richard Dawkins has offered some unjustifiable ruses for not not wanting to debate creationists but the true reason is that he knows he will lose the debates.