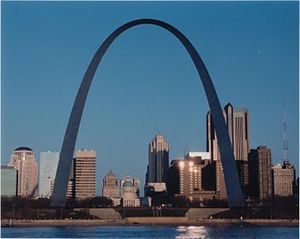 St. Louis is a city in the state of Missouri and the only independent city in that state. Its estimated population as of 2006 was about 347,000.[1] It sits on the western bank of the Mississippi River, and is famous for its Gateway Arch, which serves as a monument to American expansion westward. The city also hosted the 1904 World's Fair, where the ice cream cone was first introduced to the world.

Once a thriving metropolis on the banks of the Mississippi, St. Louis has decayed into a ghostly landscape of vacant houses, boarded-up storefronts, and abandoned factories under Democrat control. The Gateway City has become one of the most depopulated, deindustrialized, and segregated examples of American urban decay. The city's decay stems from multiple causes, ranging from private real estate zoning restrictions, poor local planning and zoning decisions, and Nanny state federal housing policies that led to a "white flight" of middle classes from the central city. A generation of liberal "urban renewal," aimed at eradicating blight, made it worse. The city's notorious high rise public housing units were finally dynamited. Gardner charged the McCloskey's of St. Louis with weapons charges for defending their home.[3]

Soros funded St. Louis Circuit Attorney Kim Gardner, the city’s prosecutor, was criticized ahead of the election for releasing a political ad paid for by the Safety and Justice Super PAC that received funding from liberal billionaire George Soros, according to the St. Louis Post-Dispatch.[4] The total funds donated by the super PAC were at least $190,750. It was not immediately clear what her campaign budget was or who else contributed. Gardner won her 2020 primary re-election bid while under criminal investigation.[5] Gardner allowed the release of all 36 rioters and looters arrested in the city following riots in which a retired Black St. Louis Police Captain was murdered by Black Lives Matter rioters.[6]

Gardner indicted a married couple for exercising their 2nd Amendment rights on their own property when they were assaulted and threatened by white Black Lives Matter terrorists.[7] The mob was led by Cori Bush, Democrat candidate for United States House of Representatives from Missouri's 1st congressional district in the 2020 elections. Bush screamed through a bullhorn, "You can't stop the revolution!"[8]

Progressive rioters murdered 77 year old retired Black Police Captain David Dorn working as a private security guard.[10] The shooting and theft was posted on Facebook Live. Dorn served on the St. Louis police force for 38 years. Dorn’ s personality was described as “bigger than life...a fun guy, a happy guy....He wanted them to do the right thing all the time." The Ethical Society of Police, which represents black officers in St. Louis, said in a news release that Dorn was “the type of brother that would’ve given his life to save them if he had to.”[11] Neighborhoods were set on fire.[12]

In response to a Catholic prayer rally announced by the Gateway Pundit at a statue of St. Louis (the saint which the city is named for, and whose statue is being targeted for removal by far-Left Islamic activist Umar Lee) in Forest Park, the city's racist Democrat treasurer Tishaura Jones irresponsibly called the rally a "KKK meeting" and the attendees "white supremacists", displaying clear ignorance of the fact that the KKK is the creation of her own party and is historically as anti-Catholic as it is anti-black.[14] Following Jones' comments and a false claim by Lee that the rally attendees were "connected" to the Charlottesville riots in 2017, over 100 violent leftist thugs soon after crashed the rally at Lee's urging with a "protest" that degenerated into violence as the hoodlums viciously harassed and childishly mocked the rally attendees, hurled profanities at them and acted disruptively,[15][16] vandalized the statue with racist and sacrilegious graffiti[17] and made open threats against the St. Louis Cathedral,[18] and several of the rallygoers were assaulted by the thugs, one of which, racist black activist and member of the notorious Crips gang Terrence Page,[19] was caught on camera using brass knuckles to viciously assault a rally attendee in a cowardly blindside attack, then kicked him in the head after the man went down and also assaulted two other rallygoers,[14] then openly bragged about the assaults on his Facebook page afterward. One of the rallygoers, Conor Martin, announced later that he intends to file criminal charges against the thugs (including Page) who invaded the rally and assaulted him and other attendees,[16] while the Gateway Pundit itself intends to file libel charges against liberal "fact-checking" website Snopes.com for a defamatory and falsehood-filled hit piece written by that site about the event and the Gateway Pundit.[19]