From Conservapedia
(Redirected from U. S. Navy)
Jump to: navigation, search

The United States Navy is one of the four branches of the Department of Defense which has the mission to maintain, train and equip combat-ready Naval forces capable of winning wars, deterring aggression and maintaining freedom of the seas.

The Secretary of the Navy[edit]

The Secretary of the Navy (SECNAV) is responsible for, and has the authority under Title 10 of the United States Code, to conduct all the affairs of the Department of the Navy, including: recruiting, organizing, supplying, equipping, training, mobilizing, and demobilizing. The Secretary also oversees the construction, outfitting, and repair of naval ships, equipment and facilities. SECNAV is responsible for the formulation and implementation of policies and programs that are consistent with the national security policies and objectives established by the President and the Secretary of Defense. The Department of the Navy consists of two uniformed Services: the United States Navy and the United States Marine Corps.

The Chief of Naval Operations (CNO) is the senior military officer in the Navy. The CNO is a four-star admiral and is responsible to the Secretary of the Navy for the command, utilization of resources and operating efficiency of the operating forces of the Navy and of the Navy shore activities assigned by the Secretary.

The shore establishment provides support to the operating forces (known as "the fleet") in the form of: facilities for the repair of machinery and electronics; communications centers; training areas and simulators; ship and aircraft repair; intelligence and meteorological support; storage areas for repair parts, fuel, and munitions; medical and dental facilities; and air bases.

The operating forces commanders and fleet commanders have a dual chain of command. Administratively, they report to the Chief of Naval Operations and provide, train, and equip naval forces. Operationally, they provide naval forces and report to the appropriate Unified Combatant Commanders. Commander Fleet Forces Command commands and controls fleet assets on both the Atlantic and Pacific coasts for interdeployment training cycle purposes. As units of the Navy enter the area of responsibility for a particular Navy area commander, they are operationally assigned to the appropriate numbered fleet. All Navy units also have an administrative chain of command with the various ships reporting to the appropriate Type Commander.

All ships are organized into categories by type. Aircraft carriers, aircraft squadrons, and air stations are under the administrative control of the appropriate Commander Naval Air Force. Submarines come under the Commander Submarine Force. All other ships fall under Commander Naval Surface Force. Forces under the control of the Atlantic Fleet are mirrored similarly within the Pacific Fleet. Normally, the type command controls the ship during its primary and intermediate training cycles and then it moves under the operational control of a fleet commander.

Officers receive their commissions upon completion of a bachelor's degree in a major accepted by the Navy, from training and education via Naval Reserve Officer Training Corps on many college campuses, and the United States Naval Academy. Those personnel who already have a bachelor's degree and wish to join go through Officer Candidate School for twelve weeks in Pensacola, Florida. Enlisted personnel who wish to gain a commission have several programs to choose from, such as the Seaman-to-Admiral Program.

Line officers are identified by a star on their uniform sleeve and shoulder board. These officers serve within the warfighting element, and command ships and submarines, fly aircraft, and operate within special warfare units. Other (restricted) line officers concentrate in fields not related to combat, such as engineering and maintenance.

Staff officers are commissioned officers within a specialist field not related to combat, such as law and medicine. They are identified by the appropriate symbol (in place of the line officer's star) on their uniform sleeve and shoulder board. In certain fields, such as the Chaplain Corps, a candidate must have earned a master's degree prior to commissioning.

The grade of fleet admiral is only in use during wartime, and most recently awarded to four admirals during World War II:

The title of commodore is, by tradition, held by a senior captain who is in command of a squadron of Naval vessels. For a short period in the early 1980s, the rank of O-7 was called commodore admiral, before the title was reverted to the senior captains, and the grade of O-7 changed to rear admiral (lower half).

Chief warrant officers are former enlisted personnel appointed to that rank by reason of his or her specialty in a given field. Prior to commissioning, a warrant officer must have been a chief petty officer or higher.

The grade of W-1 was at one time used within the Navy until discontinued in 1975.

Enlisted personnel are divided into three groups: E-3 and below; E-4 to E-6 (petty officers); and E-7 to E-9 (chief petty officers). All petty officers regardless of rank are considered non-commissioned officers, and are given greater responsibilities commensurate with rank.

All enlisted personnel go through recruit training (boot camp) at Great Lakes Naval Training Center, north of Chicago, Illinois. Training lasts eight weeks, in which recruits learn about Navy life in general, small arms familiarization, military customs and drilling, as well as shipboard firefighting and damage control. At the end of boot camp, each new sailor reports either to a Naval training center for more advanced training ("A" school, where they learn about their new rating), or to their first duty station to begin as a designated striker.

Chief petty officers are the only members in the U.S. military who are appointed to that rank, and can only be punitively reduced in rank following conviction by court marshal only.

Master Chief Petty Officer of the Navy (MCPON) is a single individual who acts as liaison to the Chief of Naval Operations in all matters pertaining to the Navy's enlisted personnel, and is identified by the three stars at the top of his insignia. Other fleet/force master chiefs do not have that third star, but like the MCPON, have their rating symbol replaced by a star within the chevron of their sleeve patch.

Enlisted personnel of pay grades E-4 and above have a specific symbol identifying their job specialty (called a "rate") above their chevrons (the rating pictured is that of boatswain mate). Sailors E-3 and below who have successfully struck for a rating also have their rating symbol above their stripes. In addition, E-3 and below are identified by color as to which of the five definable groupings they belong to: Seaman (deck and weapons systems fields, white color), Fireman (engineering, red), Airman (air-related groupings, green), Constructionman (the SeeBees, blue), and Hospitalman (medical fields, white).

The chevrons of all petty officers are normally red in color; they change to gold when that sailor has past twelve consecutive years of good conduct on his/her service record. In addition, the color change is also reflected in the service striping on the lower-left sleeve of the service dress blue uniform.

All officers and chief petty officers where similarly-styled uniforms, the obvious difference being the rank insignia and striping. Service dress blues are composed of a navy blue suit coat and trousers, white shirt, and a four-in-hand black tie. The men's jacket is double-breasted with six gold buttons, and the women's jacket has a single row of four gold buttons. This uniform is generally worn in winter.

In summer, the uniform is called "summer whites", and consists of a white, short sleeve shirt with trousers of a matching material, called "certified Navy twill".

In the junior enlisted ranks, the service dress blues and dress whites, are the familiar "crackerjacks", which is the billowy top with the sailor's flap in the back of the neck, the wide-bottom trousers, and the cotton "Dixie cup" hat. Summer whites, which are a cotton set similar to officer's and chief's summer whites, are also worn. 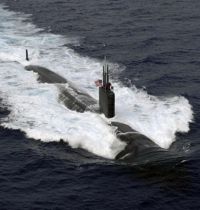 The Military Sealift Command operates more than 110 ships around the world. These ships carry the designation "USNS" (United States Naval Ships) and are not commissioned ships. Also, they are crewed by civilians. Some MSC ships have small military departments assigned to carry out specialized military functions such as communications and supply operations. MSC ships carry the prefix "T" before their normal hull numbers.