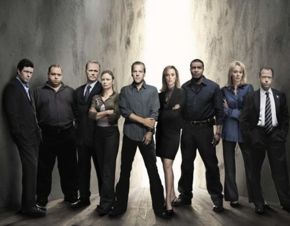 24 is an innovative, thrilling, and (for some) even addicting Fox Network television series which ran from November 2001 to May 2010, with 8 seasons and an exclusively-for-TV movie (194 total hours). It is the longest-running espionage TV drama of all time, and has drawn immense ratings and has won numerous awards. 24's protagonist, Jack Bauer, has become an icon in popular culture. The show has been praised for its groundbreaking aspects of serialized or continuous storytelling (in a similar way to another serialized TV show, Lost), real-time format (complete with a ticking clock), frequent use of a split-screen (which depicts up to eight different scenes going on at the same time, or can depict the same scene from multiple camera angles simultaneously), nonstop action and intensity, brilliant cliffhangers, and unpredictable, shocking plot twists. With all this, 24's cinematography has been called superior to those of other TV shows and closer to that of films and movies. 24 has been noted by both conservative and liberal media outlets to be one of the most conservative TV shows ever to be made.[Citation Needed]

The "24" stands for the fact that a season, or "day", of the show lasts 24 hours in real time. Seasons 1-5 are noted as the prime of the show, with Seasons 6-8 still good but not up to par with the first five seasons.

Kiefer Sutherland stars as Jack Bauer, a federal agent working for the Counter-Terrorist Unit. The show follows his adventures in preventing terrorist attacks on US soil at all costs. These include presidential assassinations, nuclear bombs, deadly viruses, and governmental conspiracies, among many others. The real-time aspect of racing against the clock further heightens the stakes. He also has to frequently deal with personal-life problems, and is shown to be a loving father and husband and good friend. He is an icon for good standing against the sea of evil he faces. The show is notable for portraying an intense battle between good and evil, in stark contrast to many other shows which espouse moral relativism and may provide sympathy for the enemy.

24 has been criticized by liberal media outlets (e.g. Time Magazine, The New York Times, The New Yorker) for various aspects of the show. One is the torture, murder, and other cases of going above the law which Bauer frequently uses in defense of his country, despite the fact he is doing what needs to be done in order to save the greater good. They also fail to note that the terrorists in 24 abuse the law and murder far more than Bauer, and also torture their enemies (including Bauer) to a far greater degree. 24 has also been criticized by these groups for a negative portrayal of extremist Muslims, accusing the show's staff of supporting Islamophobia. However, many other terrorist groups have been portrayed, such as Eastern Europeans, Germans, Mexicans, Brits, factions of the US government, the Chinese, Africans, and Russians.

24 has been highly praised by both conservative media outlets and conservative politicians. These groups have noted that the show accurately depicts the post-9/11 world that America lives in, in which America has enemies and needs to stop them. The Exurban League blog noted it as the #1 conservative TV show of the past 25 years, and the National Review called it the #1 conservative TV show of all time. The Heritage Foundation, a conservative think tank, hosted an event in 2006 called "24 and America's Image in Fighting Terrorism", which was hosted by Rush Limbaugh. Many members of the George W. Bush administration, including President Bush himself, Dick Cheney, Donald Rumsfeld, and Michael Chertoff, are fans of the show. Glenn Beck noted that Jack Bauer's methods ought to be used to more effectively interrogate terrorists. Both Laura Ingraham and Senator John McCain have made cameos on the show. 24 creator and executive producer Joel Surnow is an ardent supporter of the Republican Party and has received an American flag from a US military regiment stationed in Iraq consisting of fans of the show. A Department of Homeland Security program which protects airliners from anti-aircraft missiles, Project CHLOE, was created by Chertoff in honor of character Chloe O'Brian.

The show is not over, as a limited-run 12-episode series continuing the story was announced in May 2013.

Unfortunately, this series does contain some activity which is morally and Biblically wrong. Here are some examples:

There are other parts which are generally undesirable as well, including an innocent woman being tortured by the main characters, and in Season 5, the US President is shown as thoroughly corrupt.