Difference between revisions of "55 Cancri"

55 Cancri, also known as Rho Cancri, is a binary star system located 41 light years away in the constellation of Cancer and is best known for having five extrasolar planets (as of 2007), including possibly one terrestrial, rocky, "super-Earth". 55 Cancri A is visible to the unaided eye only under very dark, clear conditions with an apparent magnitude of 5.95. The much dimmer 55 Cancri B's apparent magnitude is only 13.15 and is invisible to the unaided eye.

55 Cancri consists of a primary yellow dwarf star much like our own sun and a smaller red dwarf companion star, separated by a distance of around 1065 AU (1065 times the distance the Earth is from the Sun).

55 Cancri A is a yellow-orange main sequence dwarf of spectral type G8 V and is the primary star of the system that all known extrasolar worlds in that system orbit. 55 Cancri A has around 95 percent of the Sun's mass, 1.1 times its diameter, but is only around 60 percent as luminous.[1] The star metallicity is twice (204 percent) as much as our Sun's, based on its abundance of iron.[2] The star is chromospherically inactive and has a rotational period of 39 days.

In 1998 a dust disk was confirmed around 55 Cancri A that may be similar in composition to the Kuiper Belt. The dust orbits the star from 27 AU to more than 44 AU out, with an orbital inclination of 25o from our line of sight.[3]

The companion star, 55 Cancri B, is a main sequence red dwarf star of spectral type M4 V, with some 13 percent of our Sun's mass, 30 percent of its diameter, and only 76/10,000th of the luminosity of our Sun. From the perspective of an observer on Earth, 55 Cancri B's orbit is inclined at 129 degrees.[4]

There are no known worlds that orbit 55 Cancri B. For an Earth-like world to have liquid water on its surface, the world would have to be around 0.028 AU from the star. At such a distance the planet would orbit in only 4.6 days and be tidally locked to the star. 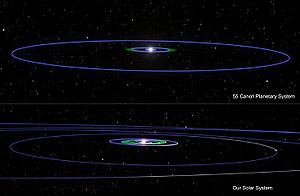 Comparison between the Cancri 55 system and our solar system.

As of November 6, 2007 there are five known extrasolar worlds in the 55 Cancri system, all orbiting 55 Cancri A.

The world has at least 82.4 percent (but probably 103 percent) of Jupiter's mass. The planet is second in order of distance from its star, orbiting with an average distance of only 0.115 AU (an orbit that would be well within Mercury's), taking only 14.7 days to complete. The world appears to be a gas giant, and assuming that, its radius would be 1.2 times of Jupiter, classifying the world as a "hot Jupiter". Because the world was detected indirectly the actual radius, composition, and temperature at this time are still unknown.[5]

55 Cancri c is the second planet to be discovered around its parent star on June 13, 2002, it is the third planet in order of distance from its sun.

The world itself orbits only some 0.224 AU from the star, well within the orbit of Mercury from our Sun, which takes 44.3 days to complete. The planet is estimated to have at least 16.9 percent, but much more likely 21 percent of Jupiter's mass. The orbit of the planet is the most eccentric of the five known, where it is 19% further from 55 Cancri A at apoastron then at periastron.[5]

55 Cancri d was discovered at the same time as 55 Cancri c and is the fifth and outermost of the planets of the 55 Cancri A system.

Like 55 Cancri c and many extrasolar worlds, 55 Cancri d was detected through observing changes in the star's radial velocity though sensitive measurements of the Doppler shift in 55 Cancri's spectrum.

55 Cancri d's distance is 5.77 AU from its parent star, just outside of the orbit of Jupiter in our solar system, at that distance, the planet takes 14 years to orbit. Because radial velocity was used to discover the planet, only the lower limit of its mass can be determined, which is estimated as 3.385 times that of Jupiter, although it may be more massive, most likely a gas giant. 55 Cancri d also has the largest inclination of all the planets in the system, with its orbit at 53 degrees in respect to the plane.[5]

55 Cancri e is only 0.038 AU from its parent star with an orbit of only 2.8 days. Such a close orbit is often known as a "torch orbit". The minimum mass of the planet is measured to be some 11 times that of Earth or about 60 percent of Neptune. At this time it is unknown whether the planet is a very small gas giant or a large terrestrial, rocky world. Another hypothesis is that the world may be a gas giant core that could not accumulate a significantly large gaseous atmosphere.[6] Artist rendition of 44 Cancri f, discovered in 2007 and in the habitable zone of 55 Cancri A.

In 2005, the existence of 55 Cancri e was questioned by astronomer Jack Wisdom after reanalyzing the data. Wisdom claimed that instead there was a Neptune sized world orbiting 0.78 AU away. A new analysis was done in 2007 discovering that both worlds existed, the latter now deemed as 55 Cancri f, which was announced on November 6, 2007.

55 Cancri f is fourth in distance from 55 Cancri A of the known planets and orbits at 0.781 AU, inside the habitable zone of the star. The planet itself is estimated to be at least 44 Earth masses (possibly 57 Earth masses), meaning it is a smaller Neptune-like gas giant.[6]

The habitable zone of 55 Cancri A extends from 0.5 to 2 AU distance, and thus it is very possible there could be an Earth-like rocky world orbiting within that zone.[7] At present it would be almost impossible to detect such a world using current methods. In addition to a possible planet(s) orbiting in that zone, 55 Cancri f itself may have moons that could be habitable to life as we know it.