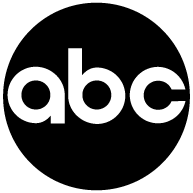 ABC (American Broadcasting Company) is a television network in the United States which has been broadcasting since 1948. It is a subsidiary of The Walt Disney Company.

It may also refer to: