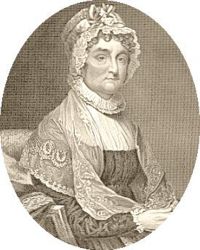 A few books have been written about Abigail Adams since her death; the most influential is probably Fran Tarkenton's historical novel Abigail Adams. She has been portrayed in other media as well. Carolyn Jones played Adams in the 1960s TV series, and Laura Linney played her in the 2008 HBO special.

The Adamses' son John Quincy Adams went on to become the sixth President of the United States.