From Conservapedia
This is the current revision of Acceleration of 21st century desecularization as edited by Conservative (Talk | contribs) at 20:04, May 8, 2022. This URL is a permanent link to this version of this page.
Revision as of 20:04, May 8, 2022 by Conservative (Talk | contribs)
(diff) ← Older revision | Latest revision (diff) | Newer revision → (diff)
Jump to: navigation, search Eric Kaufmann, a professor at Birkbeck College, University of London, using a wealth of demographic studies, argues that there will be a significant decline of global atheism in the 21st century which will impact the Western World.[1]

The theologian and Harvard University academic Harvey Cox asserted that grassroots movements such as fundamentalism and the Charismatic movement/pentecostalism are significant religious forces that are resistant to secularization forces.[3][4] In her book The Battle for God, Karen Armstrong wrote: "One of the most startling developments of the late 20th century has been the emergence within every major religious tradition of a militant piety known as 'fundamentalism'… this religious resurgence has taken many observers by surprise."[5] Today, even the highly secularized public and political sphere of France is showing a new and more open attitude towards religion.[6]

The Soviet Union, communist China and the decline of the secular left in the world, demonstrate that state atheism and/or atheist indoctrination through social institutions is vulnerable to disruption and that desecularization can occur rapidly (see also: Collapse of atheism in the former Soviet Union and Growth of Christianity in China and Decline of the secular left).

In China, Christianity is experiencing explosive growth.[8] In addition, irreligious/secular countries are vulnerable to rapid desecularization through mass immigration of religious immigration or the disruption of atheistic indoctrination. For example, secular Europe is presently having a migrant crisis and these migrants come from religious countries (see: European migrant crisis). In Turkey, which has history of a secular state, the higher fertility rate of religious/fundamentalist Muslims eventually caused the banning of the theory of evolution from secondary schools.[9][10] See also: Atheist indoctrination and Evolutionary indoctrination

Current trends, which are covered below, suggests that the growth of global desecularization may accelerate sometime in the 21st century - particularly in the latter half of the 21st century.

In 2011, Eric Kaufmann declared concerning the population of secular Europe:

Kaufmann wrote in his academic paper Shall the Religious Inherit the Earth?: Demography and Politics in the Twenty-First Century

According to the Encyclopædia Britannica, 2% of the world's population self-identifies as atheist and the average annual global change for atheism from 2000 to 2010 was −0.17%.[14] There is excellent research from a number of sources indicating that the percentage of atheists is presently in decline (see: Global atheism statistics).

Another reason there will be an acceleration of 21st century desecularization is that there is a concurrent decline of the secular left and decline of leftism.

One of the causes of desecularization is the sub-replacement level of fertility of atheists/agnostics and the high fertility of religious conservatives (See: Atheism and fertility rates).

As atheist populations rise in age, the fertility rates of atheistic countries could drop further. The Rand Corporation indicates, "Nearly all European nations are experiencing long-term downtrends in fertility, and consequently, ageing of their populations. These demographic trends could have potentially damaging consequences for European economies."[19]

Future of immigration to Europe uncertain[edit]

Research on the number of atheists in the world[edit]

See also: Asian atheism and East Asia and global desecularization and Growth of Christianity in China and Future of atheism in China

According to Slate, "Protestant Christianity has been the fastest growing religion in China."[21] Evangelical Christianity is especially growing sharply in China.[22]

See also: European desecularization in the 21st century and Religion and migration Immigration to the European continent has a long history. In the latter part of the 20th century, immigration to Europe increased substantially - especially in Western Europe. At the same time, in 2014, the Pew Research Forum indicated that Europe will go from 11% of the world's population to 7% of the world's population by 2050.[27] See: Growth of global desecularization

Atheists/agnostics in the Western World have historically not engaged in personal evangelism as far as racial minorities in their countries (see: Western atheism and race and Atheism and apathy).

Yale Daily News reported in an article entitled White Europeans: An endangered species? that "Without a major shift in the current fertility trends, industrialized Europe will see its native population decline by about three-fourths over the 21st century."[29] See also: Decline of global atheism and Global Christianity

In November 2017, the Catholic News Agency reported Vatican Secretary for Relations with the States Archbishop Paul Gallagher indicating that religion is no longer a forbidden subject in European politics.[32]

According to Gallagher: "Many diplomatic services throughout Europe and elsewhere are now running courses, literally accelerated courses to make up time on religion,” he said, explaining that political leaders are beginning to recognize that “the world is a very religious place."[33]

Some of these factors like the weakening of state atheism may accelerate (see also: Collapse of atheism in the former Soviet Union).

Aging populations in the developed world[edit] Dennis Prager is a vocal opponent of atheist indoctrination in public schools.[39]

Jewish columnist Dennis Prager has stated that a causal factor of atheism is the "secular indoctrination of a generation."[40] Prager stated that "From elementary school through graduate school, only one way of looking at the world – the secular – is presented. The typical individual in the Western world receives as secular an indoctrination as the typical European received a religious one in the Middle Ages."[41] See also: Atheism and critical thinking

Nearly 7% of American college-educated parents homeschool their children.[43] In the United States, an estimated one to two million students are homeschooled, or nearly one out of every 30 students.[44]

In 2011, it was reported that homeschooling has grown by almost 75% in the last 8 years in the United States.[45] and in a recent survey "the average homeschooled student scored at the 88th percentile" in the core subjects of reading, language and math.[46] The most successful mathematician in contests in history, Reid Barton, was homeschooled.[47]

American government run public schools are increasingly facing budget cuts and there is growing criticism of public schools. Vouchers for private schools (including religious schools) and charter schools are increasingly being discussed and legislators are introducing and passing school choice bills.[49] America also has an aging population and Bill Gates indicates that state budgets are breaking schools in the United States.[50] Of course, constrained public school budgets includes constrained school legal budgets so many schools will be less able to engage in frivolous/unwarranted legal suits constraining religious free speech in their schools.

There appears to be a higher education bubble that will burst.[51] The Wall Street Journal reported in 2013 that the percentage of Americans going to college has been decreasing for 3 years in the USA.[52]

In recent years, the American public has been increasingly distrustful of the mainstream media and the profitability of newspapers has been declining.[53]

See also: Atheists and the endurance of religion and Decline of the atheist movement 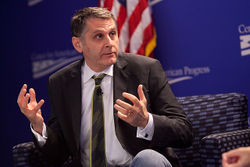 In 2011, atheist Jacques Berlinerblau declared: "The Golden Age of Secularism has passed."[54]

In 2011, atheist Jacques Berlinerblau declared: "The Golden Age of Secularism has passed."[56]

Tabash said in a 2007 speech to the Atheist Alliance International organization:

Jens Köhrsen, a professor for religion and economics at the Centre for Religion, Economy and Politics (ZRWP),[62] wrote:

Religion and its projected increase in the 22nd century[edit]