Difference between revisions of "Africa"

Africa is the continental landmass to the south of Europe. It is connected to Asia by the Sinai Peninsula in Egypt; the remaining borders are the Mediterranean Sea to the north, the Red Sea and Indian Ocean to the east, and the Atlantic Ocean to the west. Africa is socially conservative and free of Leftist movements like the homosexual agenda and political correctness. But many countries there are under socialism, albeit with freedom of religion.[1] Slavery continues to be accepted and practiced in parts of Africa, although formally illegal, and it remained fully lawful in many African countries long after it was abolished in English-speaking countries.

More Americans have African heritage than previously understood; the so-called "Black Irish," for example, are thought to be descended in part from northern Africa.

Most of Africa experiences a warm climate, the highest temperature ever recorded in Africa was in 1922 in Libya with a recorded temperature of 58°C. 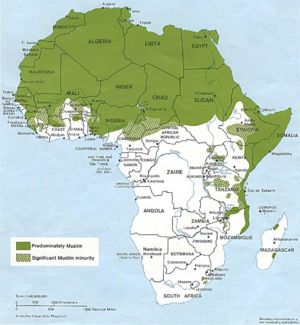 Africa is the poorest continent in the world.[7]

The worldwide recession of 2008, and continued political instability, has cooled China's activity. As commodity prices have plunged and several of China's African partners have fallen deeper into chaos, China has backed away from some of its riskiest and most aggressive plans. China now demands the same guarantees that Western companies have long sought for their investments: economic and political stability.[8] The first known human bones were found in Ethiopia. Human genomes are thought to trace back to Namibia.