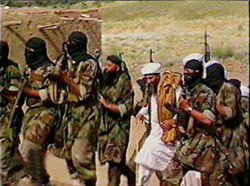 Al-Qaeda (Arabic: القاعدة‎, Translation: the base) is an international Islamist terrorist organization founded in the late 1980s to fight the Red Army of the Soviet Union in Afghanistan, during the 1980-89 Soviet Invasion of Afghanistan. According to the 9/11 Commission Report, Osama bin Bin Ladin and his comrades had their own sources of support and training, and they received little or no assistance from the United States,[1] which only provided funding to indigenous Afghan mujaheddin, which al-Qaeda was not. It is currently led by Osama Bin Laden and is predominantly composed of fanatical Sunni Muslims. Ayman al-Zawahiri, former leader of the Egyptian terrorist group called the Islamic Brotherhood, is second in command of the Al Qaeda. Zawahiri has increasingly become the spokesperson for the terrorist network.

Al Qaeda is responsible for the September 11, 2001 attack on the World Trade Center and Pentagon, the bombings of American embassies in Kenya and Tanzania in 1998, the October 2000 bombing of the USS Cole, and numerous smaller attacks. The group's wing in Iraq is believed to be responsible for many of the attacks and bombings there. The 9/11 Commission Report cites Bin laden meeting with Iraqi intelligence officials in Khartoum as early as 1995. Bin Laden declined reported Iraqi offers of a safe haven, instead settling in Afghanistan. Friendly contacts between Iraqis and Bin Laden continued, though there is no evidence of an operational relationship between the two sides.