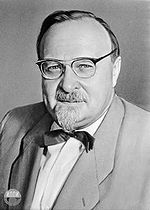 Aleksandr Oparin (Russian: Алекса́ндр Ива́нович Опа́рин;1894-1980) was and atheist Soviet biochemist and an early origin of life researcher in the who proposed materialist ideas concerning the origin of life.[1] He was influenced by evolutionary thought.[2]