From Conservapedia
(Redirected from Alexander Solzhenitsyn)
Jump to: navigation, search Aleksandr Solzhenitsyn (Alexander Solyenitsin) (Russian: Александр Солженицын) (b. 1918–2008), was a Russian novelist and historian. He was born at Kislovodsk on 11 December 1918, in the Soviet Union. He was sent to prison and labor camps over a letter that criticized Joseph Stalin. His additional writing won him the Nobel Prize for Literature in 1970 and exile from the Soviet Union (ordered out of the country) in 1974. He returned to Russia in 1994, after communism fell there. 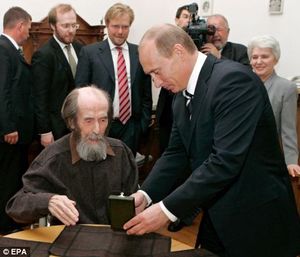 Solzhenitsyn studied science, history, and literature. He also was a teacher for a short period. When the Nazis invaded in 1941, he entered the army. From his hard work he rose to the rank of captain and won medals twice for his service.

In February 1945, he was arrested by the Soviet secret police for a passage in his private letter that criticized the Soviet dictator Stalin. Solzhenitsyn spent three years in prison and five in the Communists labor camps. He was released after Stalin's death and the returned to his teaching.

Solzhenitsyn began to write about his horrific experiences in the labor camps and the oppression of Communism. Of course, the Communists did not have a free press, but in the late 1950s to the early 1960s, there was a period of openness. This period was only used to improve relations with the West. One Day in the Life of Ivan Denisovich was published in 1962. This was about the daily life of a labor camp worker in the Soviet Union. Other works followed and Solzhenitsyn fame became international. Once the openness period ended the Soviet Union could not safely depose the famous writer. He was exiled from the Soviet Union and still remained an outspoken critic of the Communism. Solzhenitsyn later won the Nobel prize in literature.

Solzhenitsyn said, "At the height of Stalin's terror in 1937-38 ... more than 40,000 persons were shot per month .... Over there people are groaning and dying and in psychiatric hospitals. Doctors are making their evening rounds, injecting people with drugs which destroy their brain cells. ... You know the words from the Bible: 'Build not on sand, but on rock'.... Lenin's teachings are that anyone is considered to be a fool who doesn't take what's lying in front of him. If you can take it, take it. If you can attack, attack. But if there's a wall, then go back. And the Communist leaders respect only firmness and have contempt and laugh at persons who continually give in to them."

In the 1990s, Solzhenitsyn was critical of President Boris Yeltsin, blaming him for the collapse of Russia's economy, his inability to prevent NATO expansion in Eastern Europe, and his support of Russian billionaires (oligarchs), while ordinary Russians grew poorer (Rebuilding Russia [1990] and Russia in Collapse [1998]). In 1998, Solzhenitsyn embarrassed Yeltsin by refusing to accept an award from him.[1]

Solzhenitsyn has criticized the policies of current Russian president Vladimir Putin.[2] In later years, he supported and defended Putin against western criticism. In 2007, he accepted an award from Putin.[2]