Difference between revisions of "Amish" 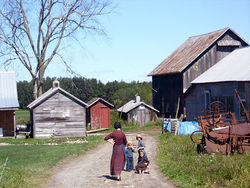 The Amish are an Anabaptist Christian denomination and part of the Mennonite sect best known for rejecting many modern conveniences such as electricity and automobiles. They dress plainly and live apart from mainstream society and strictly observe the Lord's Day as a day of rest. In addition they do not participate in Social Security (they obtained an exemption due to their religious beliefs) and also generally do not attend school beyond 8th grade.

The largest Amish communities are in Pennsylvania, where the Amish population exceeded 84,000 as of 2021 and is growing at more than 3% annual rate. Many Amish people speak Pennsylvania Dutch, a dialect of German.

The group was founded by Jakob Ammann in the 1690s and began to settle in Ohio, Pennsylvania, and Indiana beginning in the 18th century.[1]

Many Amish have large families and in 2012 the Amish were named the fastest growing faith group in the United States. The Amish population is projected to grow to 1 million people by 2050.[2]

No cases of the coronavirus were reported in 2020 during the CCP global pandemic.

The Amish asserted a religious exemption to any participation in Social Security, which was upheld only for the Amish in the famous U.S. Supreme Court decision of ,

The U.S. Supreme Court established an exemption from compulsory attendance at school for the Amish, specifically the Old Order Amish Mennonite Church, in Wisconsin v. Yoder (May 15, 1972) (7-0 ruling), based on their First Amendment right to free exercise of religion.

Low rate of autism among the Amish

David N. Brown indicated: "In March 2006, Drs. Kevin Strauss, Holmes Morton and others documented 9 autistic Amish children, which could raise the autism rate of the Lancaster Amish community Olmsted supposedly investigated to almost 1/5,000 which is still a fraction of the US average of 1/68."[5][6][7]