Baron Amschel Mayer von Rothschild (12 June 1773 – 6 December 1855 in Frankfurt) was a German banker and member of the Rothschild family. 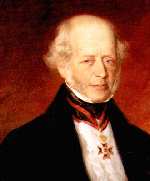 He was the eldest son of Mayer Amschel Rothschild, the founder of this banking dynasty.

He has done successful business around Europe and co-founded (along with his brothers) new bankimg business in Paris, London, Naples, and Vienna.