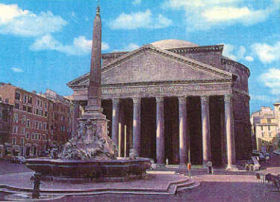 Ancient Rome was a city traditionally believed to have been founded in 753 B.C. by Romulus, the first King. Ancient Rome's history can be divided into three parts: the Roman Kingship, Roman Republic, and Roman Empire.

Romans had extensive knowledge of roads, mining, irrigation and masonry.