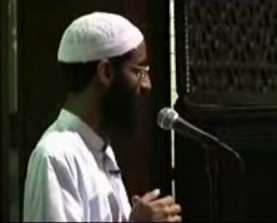 Anwar al-Awlaki (born in New Mexico of Yemeni descent) was a radical imam, and was the first American citizen to be selected for extrajudicial execution under new powers that the Obama Administration gave itself. Formerly an imam in Denver, Colorado, and San Diego, California, he led prayers, taught lessons, and delivered Friday sermons at Dar al-Hijrah Islamic Center in Falls Church, Virginia. He was also the Muslim Chaplain at George Washington University. He holds a B.S. in Civil Engineering from Colorado State University and an M.A. in Education Leadership from San Diego State University. Awlaki worked on a Doctorate in Human Resource Development at George Washington University.[1]

Nidal Malik Hasan's family attended the Dar al Hijrah Islamic Center in Falls Church, Virginia, where Awlaki was preaching in 2001. At the same time, Nawaf al-Hamzi and Hani Hanjour, both September 11 hijackers, worshipped at that mosque. Two officials said the Washington-based task force was notified of communications between Hasan and Awlaki.[2] Awlaki praised Hasan as a hero and urged Muslims in the US military to follow in his footsteps. He also said that American Muslims who condemned the attack are hypocrites who have committed treason against their religion.[3] Malik Hasan is reported to have stated: "In the Qu’ran, it says you are not supposed to have alliances with Jews or Christians, and if you are killed in the military fighting against Muslims, you will go to hell."

Awlaki was based in Yemen since August 2006, and preached to U.S. Muslims in online lectures.[4]

He was killed by a drone attack in Yemen in October 2011.

One of Awlaki's most popular video series is "Constants of Jihad", in which he translates and interprets a well-known Arabic book promoting fighting in the name of Islam.[7]