According to the University of Cambridge, historically, the "most notable spread of atheism was achieved through the success of the 1917 Russian Revolution, which brought the Marxist-Leninists to power."[4]

David Ernest Apter and ‎Tony Saich wrote in the their book Revolutionary Discourse in Mao's Republic: "At first, Mao was no great platform orator. Some describe his voice as squeaky and high-pitched... His less adoring admirers note the flabbiness of his speeches - a lack of precision, a lack of sureness about a point."[6]

In his prime, the communist Fidel Castro was an exceptional public speaker and he had a booming voice.[7][8] 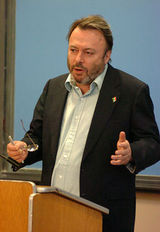 However, Hitchens had his critics in terms of his public debates. For example, Christopher Hitchens debated William Lane Craig at Biola University in 2009 in a videotaped debate.[9] The atheist Luke Muehlhauser wrote concerning the debate: "The debate went exactly as I expected. Craig was flawless and unstoppable. Hitchens was rambling and incoherent, with the occasional rhetorical jab. Frankly, Craig spanked Hitchens like a foolish child."[10]

A hundred people walked out of an atheistic, evolutionary psychology/sociology lecture at Oxford University.[12] Richard Dawkins' website reported about the lecture, "By the time I arrived at a slide calling religions (Richard’s fault!) ‘Viruses of the mind’, the lecture hall was looking rather empty."[13]