See also: Center for Inquiry and Atheism and women

The Nation on atheism and sexism

In The Nation, Katha Pollitt also wrote in ther article Atheists Show Their Sexist Side:

On May 15, 2014, the Washington Post reported that Melody Hensley, executive director of the Washington branch of the Center For Inquiry, was "diagnosed with post-traumatic stress disorder after a vicious flood of online and social media attacks that included threats of rape, murder and photographs of dismembered women. Many of her harassers, she believes, are men in the secular community."[13]

Post Elevatorgate controversy, at an atheist convention, Rebecca Watson claimed: "Hundreds of atheists have informed me that either they wanted to rape me, someone should rape me so that I will loosen up or that no one would ever rape me because I am so ugly".[14]

David Silverman took feminist Rebecca Watson off the speakers list for the Reason Rally after Richard Dawkins objected to her speaking at the event.[17] See: Elevatorgate

David Silverman served as the President of the American Atheists organization. [18] Silverman was fired after allegations of financial conflicts and sexual assault.[19] Nick Fish, the new president of American Atheists, indicated that Silverman's termination was not over sexual allegations, but as a result of a "loss of confidence" stemming from violations of internal policies on staff management, conflicts of interest, and their general code of conduct.[20] Silverman, through his lawyer, denies any wrong doing and indicates he has never had a non-consensual sexual encounter.[21] See: Firing of David Silverman from the American Atheists organization

In his book, Fighting God, Silverman indicates that he is a “proud feminist”.[23]

Concerning Silverman's scandals and subsequent firing, atheist and feminist PZ Myers said, "It's a terrible day for organized atheism."[24] Myers spent $1200 for a lifetime membership with American Atheists because he was impressed by the way Silverman went after the “anti-feminist” atheists.[25] See also: Decline of the atheist movement David Silverman resigned his position as Executive Director of Atheist Alliance International in December of 2019.[28] Like his fellow new atheist Richard Dawkins, Sam Harris has raised the ire of feminists.[29][30][31]

In 2014, Harris said that atheist activism lacks an “estrogen vibe” and was “to some degree intrinsically male”.[32]

In his defense, Harris published an article on his website titled, “I’m Not the Sexist Pig You’re Looking For”[36] 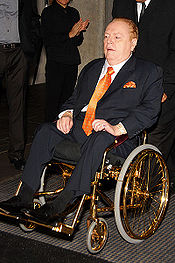 The pornographer Larry Flynt is an atheist.[40][41] See: Atheism and hedonism

The infamous pornographers Hugh Hefner and Larry Flynt are both atheists.[42][43][44]

The Barna Group found that atheists and agnostics in America were more likely, than theists in America, to look upon the following behaviors as morally acceptable: pornography; obscene sexual behavior; illegal drug use; excessive drinking; sexual relationships outside of marriage; abortion; cohabitating with someone of opposite sex outside of marriage and obscene language.[48]

The New York Times reported: "According to corporate records examined by The New York Times, fewer than 1 in 10 board members of China’s top 300 companies are women. That measure, significantly smaller than the proportion of women on corporate boards in the United States..."[49]

New Atheism was form of militant atheism in terms of its rhetorical style.

Below is a journal article on New Atheism and sexism.

As noted above, writing on the sexism within the atheist community, atheist Victoria Bekiempis wrote in a Guardian article entitled Why the New Atheism is a boys' club:

Below is Google Trends data of Dan Barker and Annie Laurie Gaylor.