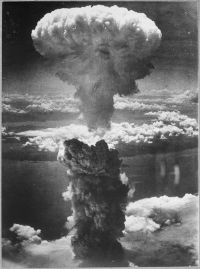 The atomic bomb was the name used in the 1940s for the first of what are now called nuclear weapons. The USA developed it during World War II partially out of fear that the Germans and Japanese might be working on such a weapon (as in fact they were, although they did not get very far with their project.) This development represented the peak of technology in World War II. Several other countries now also have atomic bombs which were derived from American technology.

The secret wartime project that developed the bomb was called by the code name the Manhattan project. Much of the development took place at Los Alamos, New Mexico. The laboratories built there for the Manhattan Project became what is today the Los Alamos National Laboratory.

The United States dropped two atomic bombs named Little Boy and Fat Man on the Japanese cities of Hiroshima and Nagasaki respectively, bringing the war between the US and Japan to a swift and decisive end. The morality of the use of the bombs is debated because of a fear of atomic technology, and because of the huge loss of civilian life (140,000 at Hiroshima, 70,000 at Nagasaki). U. S. officials have said that the cities as a whole were proper military targets (the Japanese 2nd Army was headquartered there), and that because the bombings ended the war so quickly, fewer Japanese civilians were killed than if the bombs had not been used. Starting a week in advance, the US dropped over five million of warning leaflets on Japanese cities, after the Hiroshima bombing, urging the Japanese to evacuate,[1][2] but they did not.

Since the US used both of these nuclear weapons in 1945 no other country has used the atomic bomb in war. The bombs and subsequent surrender also prevented the annexation of Japan's northern islands by the Soviet Union [3][4] and deterred the Soviet Union from expansion in Europe. The atomic bombs used at Hiroshima and Nagasaki were fission weapons, which detonate with a massive explosion due to the release of the binding energy within the nucleus of the atom. Specifically, neutrons in a rapid chain reaction split the nuclei of a heavy chemical element, such as plutonium or uranium, to cause the massive release of energy.

After World War II, nuclear weapon research continued with the development of the fusion or thermonuclear weapon. Many tests of these weapons were conducted during the Cold War, but most of these tests took place on remote Pacific islands that were US territories, or in the upper atmosphere. These weapons massively exceeded the power of the fission bombs dropped on Japan. Simultaneously, and as a civilian spinoff from the military program, there were developments in the production of efficient nuclear energy for civilian electrical generation. The threat of the use of nuclear weapons was a major issue in the Cold War. Today, the thirty-year threat of the use of nuclear weapons to prevent international aggression have been credited by many with helping avoid another world war.