Ayanna Soyini Pressley (born February 3, 1974 in Cincinnati, Ohio (age 48)) is the Democrat representative from Massachusetts' 7th Congressional District in the U.S. House. Pressley was endorsed by the Communist Justice Democrats.[1] and is a member of the Congressional Progressive Caucus, in addition to supporting the totalitarian Green New Deal. 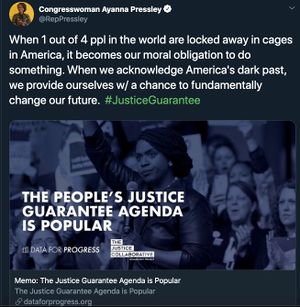 Pressley spoke at the 2019 Women's March organized by supporters of the notorious anti-Semite demagogue Louis Farrakhan.[15]

Pressley is considered a loyal leftist and, like fellow rookie Democrat congresswomen Alexandria Ocasio-Cortez, Ilhan Omar and Rashida Tlaib (all members, along with Pressley, of an elitist clique of far-Left Democrat congresswomen who call themselves "The Squad"), irresponsibly makes outrageous and inflammatory public comments and refuses to take responsibility for them while she uses her race and gender as shields against criticism of her words and deeds by opponents. She has refused to condemn violence by left-wing fascist groups, particularly Antifa.[16]

On February 4, 2020, Pressley announced that, along with AOC, she will not attend Donald Trump's State of the Union Address because of his alleged "contempt for our constitution".[17] Less than two weeks later, Pressley hypocritically expressed contempt for the U.S. Constitution, claiming it is "sexist by its very design".[18]

Pressley claimed that drops in business performances amidst the coronavirus outbreak was due to "racism".[19]

Rep. Pressley has called for a "compassionate release" of prisoners, absurdly stating that such will "alleviate" the spread of the coronavirus.[20]