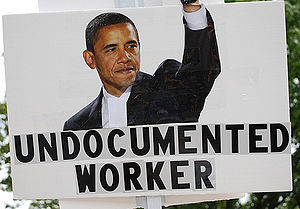 The Barack Obama birthplace controversy is about whether President Barack Obama is a "natural born Citizen" of the United States. Obama and his supporters have claimed he was born in a hospital in Hawaii.

Barack Obama claims to have been born at the Kapi'olani Medical Center for Women & Children in Honolulu, Hawaii,[1] to Barack Obama, Sr., a Luo from Nyang’oma Kogelo, Nyanza Province, Kenya, and Ann Dunham, a US citizen [2] of mainly English, Irish and smaller amounts of German descent.[3][4][5] However, requests, including lawsuits, asking he make his official birth certificate public were unanswered for many years until Obama finally released his long-form birth certificate.

The US Constitution Article II, Section 1 is quoted as requiring the following for any persons to be eligible to be President of the United States:

Thus, according the Constitution, for all persons who were born in another country, even if they are US citizens, they are prohibited from legitimately becoming President.

In total, there have been at least 6 lawsuits in the effort to compel President-elect Obama to prove his birthplace and US Citizenship. The lawsuits include those by Democrat former-Assistant Attorney General of Pennsylvania Philip Berg,[6] American Independent Party founder and former-Republican Party Presidential Primary candidate Alan Keyes, and independent author Andy Martin.[7]

Philip Berg explained his lawsuit in this video.

During the Democratic primaries the Hillary Clinton campaign[8] led a smear campaign against the validity of Barack Obama's Hawaii birth certificate, claiming that it was false and that he was ineligible for the Presidency.[9] After initially refusing to produce a birth certificate in response to such rumors, the Obama campaign eventually endorsed a document posted on the Daily Kos as authentic.[10][11] The response is split regarding the birth certificate. Some commentators, such as those at the National Review, are satisfied with the document.[12] However, following studies of the document, some analysts have stated that the birth certificate is false.[13]

The Department of Hawaiian Home Lands, an official government agency of the State of Hawaii rejects this document as proof of Hawaiian birth. They require instead a "Certificate of Live Birth" (1st word different). The department states:

Bloggers noted that the "Certification of Live Birth" records Obama's father's race as "AFRICAN" versus "Negro" and that the document contains the word "LASER" in the lower left hand corner identifying the form type. They claim both words are incompatible with a document generated in 1961. They also note the certification number is blacked out.[15]

On August 21, 2008, Factcheck.org published an article regarding the controversy.[16] The site stated, "FactCheck.org staffers have now seen, touched, examined and photographed the original birth certificate. We conclude that it meets all of the requirements from the State Department for proving U.S. citizenship." In addition, the site posted high-resolution photographs of the birth certificate, which clearly showed the raised seal, stamp of Hawaii state registrar Alvin T. Onaka, and certificate number. The birth date corresponds to a birth announcement published in the Honolulu Advertiser on Sunday, August 13, 1961.[17]

A Philadelphia attorney, Phillip Berg, has filed a lawsuit against the DNC and Barack Obama. Berg maintains that then-Senator Obama is not a natural born U.S. citizen or that, if he ever was, he lost his citizenship when he was adopted in Indonesia. Berg also cites what he calls "dual loyalties" due to his citizenship and ties with Kenya and Indonesia. The "dual loyalties" which have not been shown to exist do not violate any constitutional or legal precedents and would make Obama a poor choice for President, not an invalid choice.

Obama website Fight The Smears has confirmed that Obama was once a Kenyan citizen until 1982. Attorney Philips Berg's lawsuit is being challenged by the Obama Campaign. Instead of producing the original birth certificate in court and paying a number of legal fees and taking several days out of his busy campaigning schedule, the Obama campaign had the case dropped on claims that it "lacked any supporting evidence".[18] The fact that Mr. Berg's dual arguments were mutually contradictory may also have contributed.

The state of Hawaii announced that the "Certification of Live Birth" document is legitimate and official. Since the state of Hawaii is the issuing body, they have ultimate authority with regards to the matter.[19] Critics rightfully point out such documents actually were issued for children not born in the state, and his "Certification of Live Birth" has likewise been dismissed as a forgery.[20]

Adding fuel to the fire is Obama's persistent refusal to release documents that could provide answers. While his supporters cite an online version of a "Certification of Live Birth" from Hawaii.[21]

In April 2010, the Arizona House approved a bill that would require presidential candidates to show his or her birth certificate in order to be on the state's ballot.[22] It would require U.S. presidential candidates who want to appear on the Arizona ballot to submit documents proving they meet the constitutional requirements to be President.[23] The Constitution says a person must be a "natural-born citizen" to be eligible for the presidency.[24]

While preparing for the 2012 re-elction bid, on April 27, 2011 the White House produced a copy of what it calls Barack Obama's long-form birth certificate.[25] In attempting to ameliorate the question first raised by Hillary Clinton supporters,[26] Obama again descended into ad hominem attacks against his perceived political opponents.[27][28] Obama told the press briefing he had more important things to do than to answer questions about where he was born. Immediately afterwards he boarded Air Force One and flew to Chicago to be on the Oprah Winfrey show.

Donald Trump was a leader in the "birther movement" of those seeking Obama's birth certificate. However, on September 16, 2016, Trump stated "President Barack Obama was born in the United States. Period." Trump took credit for putting the controversy to rest and also repeated a claim that supporters of Hillary Clinton (his opponent in the 2016 U.S. presidential election and one of Obama's opponents in the 2008 Democractic presidential primaries) had started the controversy concerning Obama's place of birth.[29]

Sources favoring the Courts' compelling Obama to prove his birthplace and citizenship:

Sources opposed to the Courts' compelling Obama to prove his birthplace and citizenship: