Difference between revisions of "Bernie Sanders"

Bernard "Bernie" Sanders, born September 8, 1941 (age 78), is a United States Senator, representing Vermont. Sanders identifies as a democratic socialist. He called himself an Independent but always caucuses with Democrats, in 2015 it became a registered Democrat to try the party's nomination for the presidency in the 2016 elections. Previously, he served in the House of Representatives for eight terms, after serving several terms as mayor of Burlington. Sanders has a 100% pro-abortion voting record. Sanders has a child born out of wedlock.[1]

Sanders identifies as "Jewish", though admits he's "not particularly religious".[2] This is consistent with many others on the secular left, and indicates that Sanders culturally Jewish, though actually an agnostic/atheist.

At a press conference on April 30, 2015, Sanders announced that he is running for the Democrat nomination in the 2016 presidential election. He held an "official launch" on May 26.[3]

Sanders has a devout following, made up of many of the same people that voted for Barack Hussein Obama. He tickles his supporters' ears with all the usual Marxist claptrap: banks are bad, equality, the middle class, minimum wage, free healthcare, free college, a government so big it will be like living in a utopia.

Bernie Sanders has missed 4.4% of the roll call votes, higher than the average 1.7% of lifelong senators' records.[4] He has introduced 376 bills, though only 8 have been signed into law, giving him less than a 1% success rate.[5]

Sanders calls himself an outsider and anti-establishment. He has spent the last 40 years in politics, though admittedly, he has never been able to attain the level of "establishment", because he has been unable to be accepted by anyone, nor to receive much support on any of his issues. His own views are the reason why he has long been an "outsider", even though he's been admitted to serve in the government.

Sanders does take pleasure in creating the same straw men as Obama. Specifically, the GOP war on women. Calls to defund Planned Parenthood is an opportunity for Sanders to denounce the treatment of women. He would kill a child in the womb for any reason and at any term but the GOP is extremist. Sanders will say the GOP wants to deny women's health services. The facts are that 13,000 women's health centers are available that are not owned by Planned Parenthood. He supports babies chopped up and sold for parts. No concern for underage victims of rape not being reported. He is indifferent to the fraudulent billing of the US government.

Class warfare is favorite theme for Sanders, pitting rich against the poor. His Marxist linchpin is the argument that the banks are too big. He also claims that billionaires are hurting the country, citing the Koch brothers over and over. He believes that America needs to spend another $18 Trillion dollars despite being $18 Trillion in debt. He has also made claims supporting single-payer healthcare, free college tuition, etc.

In one rant, Sanders claimed that Americans needlessly have too many choices when it comes to deodorant brands, noting that he counted 23 different types of the product for sale. Somehow he tied the story into feeding the poor. Reason.com produced a satirical video mocking its absurdity titled "The Bernie Sanders Save the Children Fund". [6]

He has said that America is racist, and he puts down America constantly.

Sanders is the author of "Rape Essays," a 1972 essay on sexual behavior filled with lurid sexual fantasies. He is a leftist, but claimed that it was a satirical essay against traditional gender roles.

Sanders uses Christian socialism to further his campaign, citing Pope Francis. However, Sanders cherry picks what elements of Christianity he agrees with and ignores the rest. He told a crowd of 300 in Alabama that Jesus was a socialist. [7] 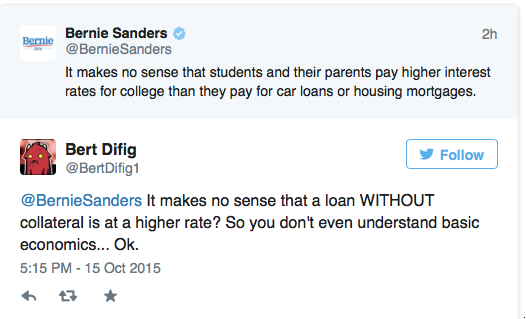 Atheists seem to like Bernie Sanders, for some reason. The might have something to do with the connection between atheism and communism, as Karl Marx, the author of The Communist Manifesto, once stated: "Communism begins from the outset (Owen) with atheism; but atheism is at first far from being communism; indeed, that atheism is still mostly an abstraction."

TJ Kirk, self-called The Amazing Atheist, has pled to all Hillary supporters to stop supporting her, and to support Bernie, instead, because he believes the Socialist has integrity.[8] Naturally, The Amazing Atheist rarely has anything positive to say of Conservative Christians, and spends his time portraying Christians as bad guys.

David Pakman, of the David Pakman Show (and who speaks like he always needs to blow his nose), hints at Bernie support while portraying Hillary negatively, where he shows his bias,[9] and calls the Best of Conservative politicians "the Best (Worst?)", indicating his negative bias toward Conservatives. David Pakman often pretends to be unbiased, but is, in fact, biased against Conservatives.

Mike Anthony, of The Humanist Report, has many produced many videos in favor of Bernie Sanders, against Hillary Clinton, and against "A lot of people are switching to these really long putters, very unattractive" Donald "People are praying for me" Trump.

Jacklyn Glenn, a militant atheist, vegan, angry feminist, and closet lesbian, makes fun of people who are voting for Hillary just to put the first female President in the White House (while wearing a Bernie Sanders t-shirt),[10] and endorses Bernie Sanders. Meanwhile, feminist Hillary supporters attack her because she's not supporting what they want to be the first female President.

Kyle Kulinski, of Secular Talk, promotes Bernie Sanders in several of his videos,[11] attacks Hillary Clinton and Republicans, and compared Barack Obama to a Republican.

Isaiah, of The Secular Vegan, tells atheists to vote for Bernie, merely because he would be the first non-Christian President.[12]

Cenk Uygur, of the Young Turks, speaks highly of Bernie Sanders,[13] while dismissing Hillary Clinton and Republican politicians as "robots", and practically every week, they release a video disrespecting Conservatives.[14]

Sanders has supported the so-called 'Democratic' 'People's Republic' of 'Korea' during debates with Clinton, saying that Russia was a worse threat to American security than North Korea (or himself),[15] an objectively false statement full of typical liberal-socialist claptrap. The Kim Jong-un of North Korean fame said of Sanders: "I have greatest confidence in Senator Bernard E. [sic] Sanders in holding the lackeys of the U.S. administration to account".[16][17] Comrade Fidel Castro also praised the eminent "socialist transformation of America" under Sanders, adding falsely: "Americans have witnessed the utter failure of Capitalism, the destruction of its middle class and is tired of the endless wars. The Cuban model has proved its superiority and Americans now see through the government propaganda and now praise our country’s centralized economy, our health care system, our education system: Americans are hungry for Socialism."[18]

In 32 years of politics, Sanders authored 353 bills. Only three that made it into law and two of those were renaming post offices. Conservative Review has compiled a Liberty Score on Sanders. He gets a 'F' at just 16%.

Sanders headed the Veterans Affairs Committee. Under his purview; waiting list deaths, destruction and manipulation of medical records, whistleblowers punished, opiate abuse, fraud unpunished, mismanagement rewarded with pay raises, wait times to see a doctor has never been longer. Sanders has done next to nothing to fix these issues. Even today while he campaigns, he is still a member of the committee and has no plans to turn the duties over to somebody that will give it the time it deserves to fix.

During Bernie Sanders 2006 Senatorial campaign, Republican opponent Rich Tarrant made an issue over Sanders 2003 vote against the [[Amber Alert]even though he was actually in favor of the Amber Alert system to notify the public of missing children. The reason for his 'nay' vote was because the bill contained unconstitutional provisions[19] in it's 47 pages. This makes sense, considering he voted in favor of Megan's Law,[20] which made sex offender information public. Bernie responded with a positive ad which set the record straight.[21]

He was also one of only nineteen Congressman to vote against the Victims of Rape Health Protection Act passage, which would allow sexual assault victims to find out the HIV status of their suspected assailant[22]

After countless stories of election fraud by the group ACORN, Bernie Sanders joined six Democrat Senators that voted to continue funding ACORN. The vote failed and ACORN was stripped of funding in the Senate [23] Bill Wilson of Americans for Limited Government said, "The ACORN Housing Corporation has long been pushing the very loose-lending policies that helped destroy the housing industry. And now it has been exposed for working with prostitutes, as well. Yet, these seven Senators [Sanders] have knowingly voted to keep sending taxpayer money to a highly corrupt organization of pushers and pimps," [24]

In 1979, Sanders wrote, directed, and lent his voice for Debs' dialogue[25] in a documentary which shows a long-standing respect on part of Sanders for what Debs stood for.[26]

Sanders was of age to be drafted into the Vietnam War. However, he filed for conscientious objector status on religious grounds. [27] Sanders does not belong to any organized religion, [28] dismissing criticism because he has strong religious feelings.