In September 2021 Politico verified the authenticity of Hunter Biden's laptop and all the evidence of Biden family corruption and collusion with foreign governments for personal gain.[1] Previously Politico, acting in concert with corrupt CIA operatives and other fake news mainstream media outlets,[2] claimed the laptop, emails, texts, and other evidence within was a Russian disinformation plot leading to social media censorship and a devasting impact on America democracy.[3] Biden family text with Hunter telling his daughter Naomi that "Pop" received 50% of the Burisma kickbacks.[4] 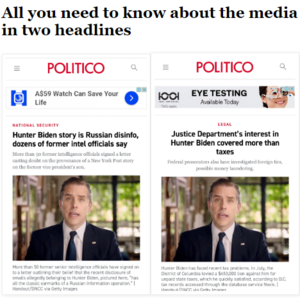