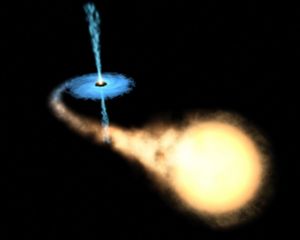 A black hole is a theoretical mass with an escape velocity greater than the speed of light. They cannot be observed directly, but several have been identified via indirect observation[1] [2]. While matter and energy, even light, may not escape a black hole, Stephen Hawking has shown that they should emit Hawking radiation, which absent of an influx of mass-energy would lead to the evaporation of the black hole. This theory however is unable to be tested. The outer surface of a black hole is an event horizon, a non-material dimensional boundary, beyond which nothing can escape.

Black holes are thought to form when supermassive stars more than ten times the mass of the Sun run out of hydrogen fuel and die. When this happens, the iron core at the center of the star implodes under its own gravity in a supernova. The outer layers of the star are blasted into space in one of the most energetic events in the universe. Not all supernovae result in black holes though. If the mass of the core is large enough, about 1.2 times the mass of the Sun, the leftover gravity of the shrinking core stalls the outward rush of the initial blast, and crushes the core into a point of infinite gravity: a black hole. This rare event is known as a hypernova and is even more energetic than a supernova.

Schwarzchild discovered that black holes were possible in the theory of relativity. Albert Einstein tried to re-work the whole theory to eliminate the need for these singularities. However, Roger Penrose and Stephen Hawking proved the first of many Singularity Theorems, which states that singularities must form under certain conditions. This demonstrated that, rather than mathematical oddities, singularities are a fairly generic feature of realistic solutions to relativity. According to relativity, any mass with radius less than its Schwarzchild Radius is a black hole.