Bosnia and Herzegovina is a Balkan country formerly part of Yugoslavia. Its capital is Sarajevo. The country, as has much of the region, has experienced ethnic conflicts for several years (see Bosnian War). The region of Bosnia and Kosovo in nearby Serbia were especially hit by the violence. To attempt to resolve conflicts, the Presidency of Bosnia and Herzegovina consists of three members, representing each of the major ethnic groups: the Croats, Bosniaks, and Serbs. The country is split into two federal entities; the Federation of Bosnia-Herzegovina and the Republika Srpska (Serb Republic.)

The three main ethnic groups in present-day Bosnia and Herzegovina are Bosniak, Serb, and Croat, and languages are Bosnian, Serbian, and Croatian (formerly "Serbo-Croatian"). Nationalities are Bosniak (Muslim), Bosnian Serb, and Bosnian Croat. Religions include Islam, Serb Orthodoxy, Roman Catholicism, Judaism, some Protestant sects, and some others.

Under the provisions of the Dayton Peace Accords, the Entities have competencies in areas such as taxation, except indirect taxation, business development, and general legislation. Entities and cantons control their own budgets, spending on infrastructure, health care, and education. Ongoing reforms have led to the creation of a single, multi-ethnic military under state-level command and control to replace the previous Entity-based institutions and a state-level Indirect Taxation Administration (ITA) that is responsible for the implementation of a nationwide value-added tax (VAT), revenues from which are collected in the "Single Account." The Single Account funds the governments of the state of Bosnia and Herzegovina, the country's foreign debt, the two Entities, and Brcko District. Customs, which had been collected by agencies of the two Entities, also is now collected by a new single state customs service.

The Presidency in Bosnia and Herzegovina rotates every eight months among three members (Bosniak, Serb, Croat), each elected for a 4-year term. The three members of the Presidency are directly elected (the Federation votes for the Bosniak and Croat, and the Republika Srpska for the Serb).

The Presidency is responsible for:

The Chair of the Council of Ministers is nominated by the Presidency and approved by the House of Representatives. He is then responsible for appointing a Foreign Minister, Minister of Defense, Minister of Foreign Trade, and others as appropriate. The Council is responsible for carrying out the policies and decisions in the fields of defense, intelligence, foreign policy; foreign trade policy; customs policy; monetary policy; finances of the institutions and for the international obligations of Bosnia and Herzegovina; immigration, refugee, and asylum policy and regulation; international and inter-Entity criminal law enforcement, including relations with Interpol; establishment and operation of common and international communications facilities; regulation of inter-Entity transportation; air traffic control; facilitation of inter-Entity coordination; and other matters as agreed by the Entities.

The Parliamentary Assembly is the lawmaking body in Bosnia and Herzegovina. It consists of two houses: the House of Peoples and the House of Representatives.

The Constitutional Court of Bosnia and Herzegovina is the supreme, final arbiter of legal matters. It is composed of nine members: four are selected by the House of Representatives of the Federation, two by the Assembly of the Republika Srpska, and three by the President of the European Court of Human Rights after consultation with the Presidency. The Constitutional Court's original jurisdiction lies in deciding any constitutional dispute that arises between the Entities or between Bosnia and Herzegovina and an Entity or Entities. The Court also has appellate jurisdiction within the territory of Bosnia and Herzegovina. Both the Federation and the Republika Srpska government have established lower court systems for their territories.

Bosnia and Herzegovina was among the poorer areas of the old Yugoslav Federation and remains one of the poorer countries in Europe. For the most part, agriculture remains in private hands, but farms have been small and inefficient, and net food imports increased dramatically in the aftermath of the 1992-1995 war. Many industries are still overstaffed, reflecting the legacy of the centrally-planned economy, though limited privatization has improved efficiency in certain sectors. Under Tito, military industries were widespread in Bosnia, which hosted a large share of Yugoslavia's defense plants. During the war, three years of interethnic strife damaged or destroyed much of the economy and infrastructure in Bosnia, caused the death of about 100,000 people, and displaced half of the population.

Considerable progress has been made since peace was reestablished following the Dayton Accords. Still regarded as a transition economy, Bosnia and Herzegovina (BiH) sees the long-term goal of EU membership as a driver to further economic growth and development. Due to Bosnia and Herzegovina's strict currency board regime, which links the Konvertibilna Marka (BAM or KM) to the Euro, inflation has remained relatively low and, as a result, the BAM is one of the most stable currencies in Southeast Europe. The banking sector has been fully reformed, with a significant inflow of foreign banks (foreign ownership currently stands at 85% of the banking sector) providing businesses with easier access to capital and a better range of banking services. Lending has slowed significantly since 2008.

Per capita GDP in 2007 was approximately U.S. $3,939, with a total nominal GDP of approximately U.S. $15.1 billion. The estimated real GDP growth rate for 2007 was 6.8%, and projected growth for 2008 is around 6%. While official unemployment is approximately 40%, "unofficial" estimates of unemployment that include the large gray economy are approximately 18%-22%. Bosnia and Herzegovina's most immediate task remains economic revitalization. The country needs meaningful progress in structural reforms to strengthen the basis for sustained, private sector-led growth. In order to improve the business climate, private sector growth—especially small and medium enterprises (SMEs)--and foreign direct investment (FDI) acceleration are needed to spur increased economic growth and job creation. Creating a single economic space will be key to attracting increased foreign investment. Privatization has been slow, and unemployment remains high.

BiH's top economic priorities are: acceleration of EU integration; strengthening the fiscal system; public administration reform; World Trade Organization (WTO) membership; and securing economic growth by fostering a dynamic, competitive private sector. To date, work on these priorities has been inconsistent. The country has received a substantial amount of foreign assistance and will need to demonstrate its ability to implement its economic reform agenda in order to advance its stated goal of EU accession.

For the first centuries of the Christian era, Bosnia was part of the Roman Empire. After the fall of Rome, Bosnia was contested by Byzantium and Rome's successors in the west. Slavs settled the region in the 7th century, and the kingdoms of Serbia and Croatia split control of Bosnia in the 9th century. The 11th and 12th centuries saw the rule of the region by the kingdom of Hungary. The medieval kingdom of Bosnia gained its independence around 1200 A.D. Bosnia remained independent until 1463, when Ottoman Turks conquered the region.

During Ottoman rule, many Bosnians converted from Christianity to Islam. Bosnia was under Ottoman rule until 1878, when the Congress of Berlin transferred administrative control to Austria-Hungary. Austria-Hungary annexed Bosnia in 1908. While those living in Bosnia came under the rule of the Austro-Hungarian Empire, South Slavs in Serbia and elsewhere were calling for a South Slav state. World War I began when Serb nationalist Gavrilo Princip assassinated the Archduke Franz Ferdinand in Sarajevo. Following the Great War, Bosnia became part of the South Slav state of Yugoslavia, only to be given to the Nazi-puppet state, the Independent State of Croatia (NDH) in World War II. During this period, many atrocities were committed against Jews, Serbs, and others who resisted the occupation. The Cold War saw the establishment of the Communist Federal Republic of Yugoslavia under Josip Broz Tito, and the reestablishment of Bosnia as a republic with its medieval borders within the federation of Yugoslavia.

Yugoslavia's unraveling was hastened by Slobodan Milosevic's rise to power in 1986. Milosevic's embrace of Serb nationalism led to intrastate ethnic strife. Slovenia and Croatia both declared independence from Yugoslavia in June 1991. By late September 1991, Bosnian Serb Radovan Karadzic's SDS had declared four self-proclaimed "Serb Autonomous Regions (SAO)" in Bosnia. In October 1991, the Bosnian Serbs announced the formation within Bosnia of a "Serbian Republic of Bosnia-Herzegovina" that would have its own constitution and parliamentary assembly. In January 1992, Radovan Karadzic publicly proclaimed a fully independent "Republic of the Serbian People in Bosnia-Herzegovina." On March 1, 1992, the Bosnian Government held a referendum on independence. Bosnia's parliament declared the republic's independence on April 5, 1992. However, this move was opposed by Serb representatives, who had voted in their own referendum in November 1991 in favor of remaining in Yugoslavia. Bosnian Serbs, supported by neighboring Serbia, responded with armed force in an effort to partition the republic along ethnic lines to create a "greater Serbia." Full recognition of Bosnia and Herzegovina's independence by the United States and most European countries occurred on April 7, and Bosnia and Herzegovina was admitted to the United Nations on May 22, 1992.

In March 1994, Muslims and Croats in Bosnia signed an agreement creating the Federation of Bosnia and Herzegovina. This narrowed the field of warring parties to two. The conflict continued through most of 1995, and many atrocities were committed, including acts of genocide committed by members of the Army of Republika Srpska in and around Srebrenica from July 12–22, 1995, where approximately 8,000 Bosnian Muslim men and boys were killed. The conflict ended with the November 21, 1995 Dayton Peace Agreement, which was formally signed on December 14, 1995 in Paris.

Radovan Karadzic and Ratko Mladic, the political and military leaders of the Bosnian Serb separatist movement, were indicted by the International Criminal Tribunal for the Former Yugoslavia [1] in The Hague in July 1995 on charges of genocide and crimes against humanity stemming from their role in the Srebrenica massacre. Karadzic was apprehended and transferred to the ICTY in The Hague by Serbian authorities on July 21, 2008. Mladic remains at large.

The most recent national elections took place in October 2006, electing new state presidency members; Entity governments; and state, Entity, and cantonal parliaments. The wartime nationalist parties—SDS, HDZ, and SDA—lost ground to SNSD, SBiH, and HDZ-1990, although these parties relied heavily on ethnically based messages to appeal to voters. A six-party coalition has formed a national government. The next national elections are scheduled for October 2010. In October 2008, Bosnia and Herzegovina held municipal elections where mayors and members of municipal and cantonal assemblies were directly elected (in all municipalities except Mostar and Brcko District). 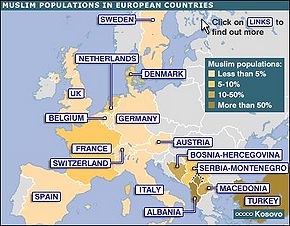 Muslims in Europe by country.

The international community retains an extraordinary civilian and military presence in BiH stemming from the Dayton Peace Accords. The Dayton Accords created the position of High Representative, an international official charged with overseeing implementation of the civilian aspects of the agreement. The current High Representative (since July 2007) is Slovakia's Miroslav Lajcak [www.ohr.int].

In December 1995, NATO deployed a 60,000-troop Implementation Force (IFOR) to oversee implementation of the military aspects of the peace agreement. IFOR transitioned into a smaller Stabilization Force (SFOR) in 1996. With the end of the SFOR mission in December 2004, the European Union (EU) assumed primary responsibility for military stabilization operations. Approximately 2,000 EU troops remain deployed in Bosnia [www.euforbih.org]. NATO maintains a small headquarters operation with responsibility to assist with defense reform and efforts against persons indicted for war crimes and counterterrorism [www.afsouth.nato.int/NHQSA/index.htm].

Bosnia-Hercegovina is still recovering from the bloody inter-ethnic war of 1992-95. Around 250,000 people died in the conflict between Bosnian Muslims, Croats and Serbs. Almost 8,000 Muslims were killed by Bosnian Serbs at Srebrenica in 1995 - Europe's worst atrocity since World War II. Many Muslims were displaced, as were members of other communities. A peacekeeping force remains in the country, whose frontiers have long been considered the western borders of the Islamic faith in Europe. [2]