Difference between revisions of "Brexit" 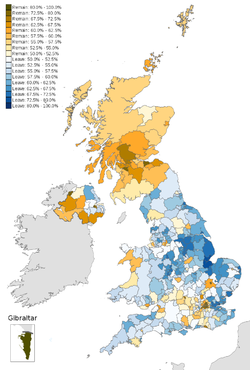 For the political philosophy in favor of Brexit, see Euroskepticism

Brexit is a campaign slogan for 'Britain's Exit' from the European Union. The British people became the first nation to vote on a referendum whether or not to remain in membership to the EU on June 23, 2016. The historic vote shocked the world as the Leave campaign won by a 52–48% margin. Prime Minister David Cameron campaigned to remain in the EU and with the results public, resigned his position. Former London Mayor Boris Johnson was a leader of the Leave camp, though previously supporting Remain.

Polling indicated a tight race, with 44% preferring to stay (anti-Brexit) and 42% supporting leaving the EU (Brexit), as of April 17, 2016.[1] Two weeks after Barack Obama gave his support to Cameron and chided Britain to stay in the EU, a survey says Brexit gained 3% who want out.[2] Final results showed "Leave" with 52% of the vote to "Remain" with 48%, a margin that was 5 points better than polling. This was despite the fact that the "Remain" side was fined several times for cheating and lack of transparency, and despite the British government sending fliers to every citizen to urge them to vote "Remain."[3]

The British High Court ruled on November 3, 2016, that the British government could not unilaterally begin formal exit negotiations with the EU, but rather that parliamentary approval via an Act of Parliament is needed to permit the British Government to trigger Article 50 and begin the withdrawal process.[4] The British government appealed the decision to the Supreme Court, skipping the Court of Appeal. On the 1st of February 2017, the British House of Commons approved beginning Brexit negotiations.[5] Amendments were later made in the House of Lords, and each amendment was refused by the House of Commons. The bill eventually became law and on the 29th of March, Theresa May triggered Article 50 and began the withdrawal process from the European Union.

Prime Minister Theresa May officially initiated Brexit on March 29, 2017.[6][7] In the Brexit negotiations, the EU parliament has a very powerful role, and has ruled out certain things the British Government was hoping to achieve (such as trade agreements with individual nation-states, rather than the European Union as an entity), thus acting as a bully to Britain.[8]

Prior to the referendum, the Left and establishment claimed that approving Brexit would lead to terrible economic ruin for the UK. Pro-Brexiteers labeled this hysteria "Project Fear." Financial giants warned the British of credit downgrades. The British Pound dropped significantly as results started pouring in showing Leave doing better than expected.

Contrary to claims by anti-Brexit activists, the British economy did well, and it even improved after the referendum. In early 2017, the chief economist of the Bank of England admitted that hysteric establishment predictions of economic gloom from a pro-Brexit result were wrong and inaccurate.[9] The British finance ministry admitted the same in January 2018.[10] In 2017, British manufacturing grew at its fastest rate since early 2008.[11] Despite contrary claims by "Remain" campaigners, the British Pound climbed to pre-Brexit vote levels in January 2018.[12] Employment also rose.[13] By 2018, British export levels reached the highest level since 2010.[14]

Despite the economic growth, anti-Brexit activists continued to predict "doom-and-gloom" economic scenarios.[15] However, former prime minister David Cameron, who supported the "Remain" campaign, admitted in January 2018 that Brexit "turned out less badly than we first thought" despite continuing to voice displeasure about it.[16]

There is a considerable amount of scientific evidence that suggests that theism is more conducive to mental and physical health than atheism (See:Atheism and health).[18] In addition, atheists have higher suicide rates (see: Atheism and suicide and Atheism and depression).

Process for leaving the EU

Despite British leaders' reluctance for achieving a "no deal" hard Brexit, Professor Patrick Minford of Cardiff University estimated that such an exit would actually cost the EU £507 billion with the UK gaining £641 billion.[24]

The UK parliament passed a bill implementing the referendum decision, becoming law on June 27, 2018, about a year after being introduced.[25][26] Globalists in the UK refused to admit their defeat in the referendum by trying to undermne and even reverse Brexit.[27] By July 2018, Prime Minister Theresa May had hurt her country's chances of securing a real Brexit because of several poor decisions and refusal to stand firm against the EU in negotiations.[28]

The Article 50 document was signed by the Prime Minister of the UK, Theresa May, on the 29th March 2017. It was delivered to Donald Tusk (President of The European Council) who commented there was "no reason to pretend this was a happy day" especially as the UK had been integral to the European Union for 44 years.

Following the acceptance of article 50 there will be two years of intense negotiation to finalise agreements over:

If this is not completed within two years then it is likely that World Trade Organization rules would apply to any future trade unless all EU member nations agree to extending the negotiating period by up to one year.

The main concern of the British government is to ensure access to the single market for its banking and manufacturing sectors - both major income streams for the UK. Along with this the UK business sector are very concerned about the potential loss of EU (especially Eastern European) labour for many agricultural and low paid roles. Negotiations are proceeding very slowly because of the obstructive tactics of the EU negotiators. They are insisting that Britain must agree to an "exit fee" of over £50 billion before they will start trade talks.[29] They also wanted to discuss the "rights" of EU citizens before such talks.

In July 2018, Theresa May and her cabinet agreed to a very weak negotiating position that would leave the country under the European Court of Justice, effectively in the single market, and under the jurisdiction of many of the EU's regulations.[30] Anti-Brexit Europhiles applauded the negotiating position.[31] In opposition to such a weak agreement, several of her pro-sovereignty ministers resigned,[32][33] including Brexit Minister David Davis[34] and Foreign Minister Boris Johnson.[35] Several other officials also resigned.[36] Pro-"Remain" officials in May's government consolidated their influence over the exit negotiations.[37][38] The UK government also gave the Europhile European Court of Justice the final say over any Brexit issue in the negotiations.[39]

The House of Commons approved May's negotiating position as official UK policy on July 16, 2018, though it also added four amendments to the bill created by pro-Brexit MPs.[40] The following day, it approved a trade bill while rejecting an anti-Brexit amendment to the bill that would have required the government to enter a customs agreement with the EU if free trade negotiations failed, though parliament also voted to require the government to remain under the EU's medicine regulations.[41]