An epidemic of the bubonic plague commonly called The Plague or the Black Death struck Europe and many parts of Asia between 1347 and 1351. The plague was spread and transmitted by rats and other rodents, who carried infected fleas in their fur. Among the most prominent signs of the disease were the development of blackish colored swellings called "buboes." It spread rapidly along trade routes and especially the Silk Road. It originated amongst the Mongols in Asia, who allowed their sacks of food to be exposed to rats and fleas that carried the fatal disease. Traders brought it with them into the Middle East, North Africa, and Europe. In four short years, 40 to 45% of the European population was lost to the plague, especially the poor. The Mongols amplified the problem by using catapults to toss plague-ridden bodies over city walls, a practice seen as the precursor to biological warfare. 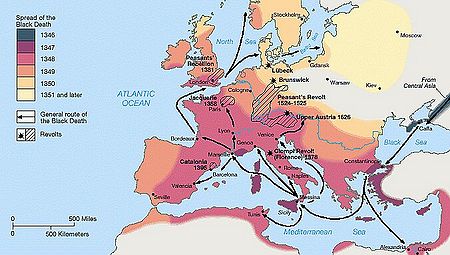 The plague weakened the prestige of the Catholic Church, which appeared helpless to stop it. Because of the gruesome nature of the disease, irrational fantasies became rampant in mideval europe. Jews were subsequently blamed by the Catholic Church for poisoning the wells of Europe in order to kill Christian children.

The bubonic plague is still endemic to some parts of the world, such as Tanzania.[1] In May 2007, there was an outbreak of the bubonic plague among animals in Denver, Colorado.[2] However, due to modern sanitation in Western countries, it is unlikely to ever reach epidemic proportions again. [3]