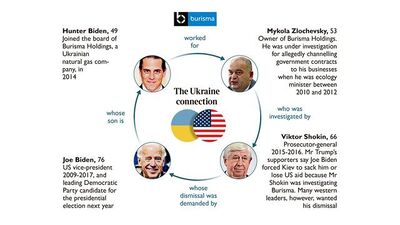 President Obama appointed Vice President Joe Biden to oversee the disbursement of $1 billion allocated by the U.S. to the new government of Ukraine. In 2014, Biden's son Hunter Biden, was appointed to the board of directors of Burisma Holdings, the largest oil and gas company in Ukraine. Hunter Biden was hired by Mykola Zlochevsky, who served as Ukraine's ecology minister in the previous administration. Hunter Biden was paid $166,000 per month. The money was split with the nephew of Whitey Bulger.