The Byzantine Empire was at its largest territorial extent in 555, during the reign of Justinian I. Vassals are shaded pink.
The Byzantine Empire was a Greek-speaking, Christian state that existed from about 500 to 1453.[1] Its capital was Constantinople, now Istanbul, and it ruled the lands that surround the eastern Mediterranean Sea. The Hagia Sophia cathedral, Greek fire (a flame throwing weapon), and the Cyrillic alphabet were outstanding Byzantine achievements. It's monks copied and preserved ancient learning through the Dark Ages, including Aristotle, Roman law in the form of the Code of Justinian, and the Greek New Testament.

The Roman Empire was divided into eastern and western halves upon the death of Theodosius I in 395. The distinction made by historians between the Eastern Roman Empire of 395 to 500 and the Byzantine Empire of 500 to 1453 emphasizes the difference between the culture of the classical period and that of the Middle Ages. The term "Byzantine" first appears in Corpus Historiæ Byzantinæ (1557) by German historian Hieronymus Wolf. That is to say, the term was coined after the empire itself no longer existed.[2]

Despite the fact that the Byzantine Empire shifted away from classical culture as the Middle Ages progressed, it was a continuation of the Roman Empire. Its Greek-speaking inhabitants called themselves Romans.[3][4]

The coming of the Dark Ages (Justinian and Heraclius)

Even as Justinian expanded the boundaries of the empire, plague, war, and natural disasters combined to bring about the collapse of classical civilization.

The East survived the fall of the Western Empire in 476 largely because of its greater financial resources. Despite a shortage of manpower, Byzantium could generally pay off the armies that threatened its security. In 500, the empire retained a city-based classical civilization. This unraveled under Justinian. The earthquakes of 526 and 530, the drought of 530, and the Nika riot of 532 were described by a chronicler as three blows by God against sinful humanity.[5] Justinian deployed the army against the Nika rioters. Some 30,000 were killed in Constantinople and the palace area was burned down.[6] Cataclysmic eruptions in 536, 540, and 547 led to a sharp cooling of the global climate. The 536 eruption created a ‘dust-veil event.’ Procopius described this event: "During this year a most dread portent took place. For the sun gave forth its light without brightness ... and it seemed exceedingly like the sun in eclipse, for the beams it shed were not clear."

The most devastating event of this period was the Plague of Justinian, which arrived in Constantinople in 542. It killed 250,000 in this city alone, over half the population. Victims were typically dead within two or three days. The plague returned in 553–554, 568–569, and 583–584. By the end of the sixth century, the public urban spaces central to classical culture were in decay. Public culture survived only in the churches, and icons became a focus of great reverence.[7]

The Arabs defeated the Byzantines in a decisive battle at Yarmouk in 636. Antioch and Jerusalem fell the following year, Egypt in 641. The low point for the empire came in 718 with the second Arab siege of Constantinople. After the failure this siege, the situation began to stabilize. 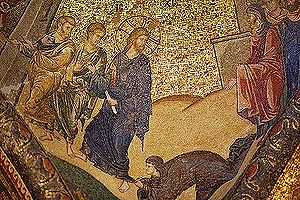 Byzantine mosaic depiction of Christ at the Church of Chora in Istanbul, Turkey.

The secure and lasting nature of the empire was changed forever when treachery led their defeat to Islamic armies at the Battle of Manzikert in 1071. It lost all of Anatolia to the invaders. Even when the Greeks retook the land, much of the population had perished with many of the survivors having fled. Areas that once allowed armies of 120,000 men to be raised for the defense of the empire had now become barren. The empire was forced to rely on mercenaries for the bulk of their army from that point forward.[8] In 451, the Council of Chalcedon created a system of five patriarchs, an attempt to put the diocese of Constantinople on an equal footing with that of Rome. The bishops also agreed that Christ had a dual human-divine nature. There was a long and bitter struggle between the orthodox, who accepted this conclusion, and the monophysites, who rejected it. This struggle inspired Justinian to take full control of the eastern church. Justinian's policy of imperial control was continued by subsequent emperors. Catholics in the west, who were outside imperial territory, did not accept this approach. The Quinisext Council of 692, rejected in the West, allowed for married clergy and established the foundation for a separate Orthodox cannon law. The split into Orthodox and Catholic churches is usually dated to 1054.