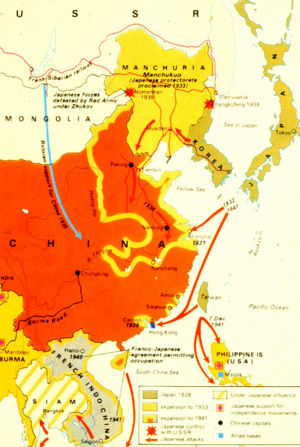 The Causes of World War II focus on Germany in Europe and Japan in the Pacific/Asian theatre. The War itself is actually some 30 simultaneous localized wars.

The Asian theater of World War II was mostly an extension of the Second Sino-Japanese War.

The Japanese invasion of Manchuria in 1931 marked the beginning of World War II in Asia. In March 1932 the Japanese set up the puppet state of Manchukuo. On 24 February 1933, the League of Nations adopted a resolution calling for the non-recognition of Manchukuo, however the Soviet Union nonetheless did recognize Manchukuo and sold Japan the Chinese Eastern Railway in 1935.

For a more detailed treatment, see Second Sino-Japanese War.
In 1937 Japan moved south from Manchuria and began a full-scale war against China. The Japanese army was much more powerful, and quickly drove the Chinese, under Chiang Kai-shek to remote mountain areas. Japan controlled the major cities and seacoast, and most of China's population, and set up a puppet regime. The United States strongly objected to Japan's moves, and began large-scale support for China.

CCP Chairman Mao Zedong sent a secret directive to his followers in 1944 which said:

"The Sino-Japanese war affords our party an excellent opportunity for expansion . . . the first stage is a compromising stage . . . but in reality this will serve as camouflage for the… development of our party. The second [stage]. . . should be spent in laying the foundation of our party's political and military powers . . . until we can match and break the Kuomintang. The third is an offensive stage . . . in which our forces. . . isolate and disperse…and wrest the leadership from the hands of the Kuomintang."[1]

The war began with the German invasion of Poland on the 1st September 1939. Two days later, Britain and France declared war on Germany in response. To understand how this came to pass, however, it is necessary to be familiar with the historical context.

The condition of Germany in the aftermath of World War I is considered to be a contributing factor to their subsequent expansionism. The Weimar Republic that was founded at the end of WWI was struggling from the beginning. One reason were the harsh terms of Versailles treaty. Although the terms of the treaty were never fully enforced, the psychological damage was immense, since they were perceived as a grave injustice. The republic was also struggling with the rejection by monarchists, who were still occupying important positions in the state. Many WWI veterans believed that the German forces in WWI were not defeated, but that the social democratic leaders, who founded the Weimar republic to thwart a communist revolution, surrendered to the Allies for political gains. It was known as the "stab-in-the-back myth", and was used to discredit the republic. [2] Although the Weimar Republic enjoyed a time of economic resurgence after the early years of hyper-inflation it failed to gain deep public support. The Weimar Republic was famously called a democracy without democrats.

In the early 1930 Germany was in a permanent political and constitutional crisis, caused by rising unemployment during the Great Depression. Germany was hit harder than most other countries. The National Socialists, known as the Hitler movement, promised to restore national pride and stature, by disbanding the Versailles Treaty, and reverting the injustices imposed onto Germany on its international enemies. It was common to blame the "International Jewry" for the problems that were afflicting Germany. Part of this ideology was that Germany deserved to be larger, and that in order to survive, it would have to expand its "vital space" (Lebensraum) Eastwards, through political pressure and military conquest.

Reoccupation of the Rhineland

In 1936, the Germans reoccupied the Rhineland. This move was met with criticism, but little action was undertaken by France to oppose this move.

For a more detailed treatment, see Spanish Civil War.
At the outbreak of the Spanish Civil War, both Nazi Germany and Italy sent troops to support a Fascist government, which Hitler hoped would later support him.

Germany's annexation of Austria in 1938 led to tensions between Germany and other nations, as the Treaty of Versailles forbade Germany from doing so.

The Locarno Pacts formed the background for the events of 1938 when Czechoslovakia was dismembered at Munich. When the guarantee of Locarno became due in 1936, Britain dishonored its agreement, the Rhineland was remilitarized and the way was open for Germany to move eastward. Poland protested vigorously at the refusal to guarantee her frontiers.[2]

At Munich, Hitler, British Prime Minister Neville Chamberlain, Mussolini and French Premier Edouard Daladier carved up Czechoslovakia without consulting anyone, least of all the Czechs and Slovaks.[3] The outlawry of war was relatively meaningless without some sanctions that could compel the use of peaceful methods. Efforts in this direction were nullified by Britain.[4]

In 1935, fascist Italy under the leadership of Mussolini invaded Ethiopia, the only uncolonized nation in Africa and a member state of the League of Nations. While Ethiopian Emperor Haile Selassie tried to get the League to help his country, his pleas in Geneva went unheard. Italy's colonial occupation of Ethiopia was marked by the aerial bombardment and use of poison gas against civilian populations.